There are lots of tough decisions one has to make in his or her life…  Which college should I go to?  Should I get married?  Kids?  How much should I spend on my house?  Boxers or briefs?  And, of course, which color Leica M should I get.  That last one isn’t as common as the other questions but it’s equally important…  To the person making it (ask any Leica M owner how much time they spent going back and forth over which color they should get for days before pulling the trigger on their next camera).

Look, I get it, buying a Leica is a big investment.  What if you choose the wrong one and then your stuck with it for the next 4 to 6 years until Leica releases a new M?  Nobody likes spending lots of money on something and then lusting over something else.  So, I set out to answer this question once and for all and I’ve got great news:  I’ve found the answer.

Note:  This is not an advertisement for Leica, I have not affiliation with any camera company and do not receive free free or loaner cameras for review.  I’m just a professional photographer who prefers the Leica M.  My other car is a Nikon.

First, lets look at the argument for the black Leica M.  The black is arguably more discrete than the silver and black body.  I can agree with that comment to some extent…  I’d say that when I’m walking around with the black M at my side nobody even notices it, it blends right in with my clothing.  The silver and black tends to grab people’s eyes even when it’s slung over my shoulder, I think because of the juxtaposition between the silver paint and my neutral colored clothing.  However, when it actually matters, when the camera is pressed to my face, I don’t think there’s a big enough difference between silver or black to base a purchase off of it.  At the end of the day, you’ve got a large rectangle pressed to your face and you’re probably going to stick out a bit from everyone else with, you know, just their nose on their face. 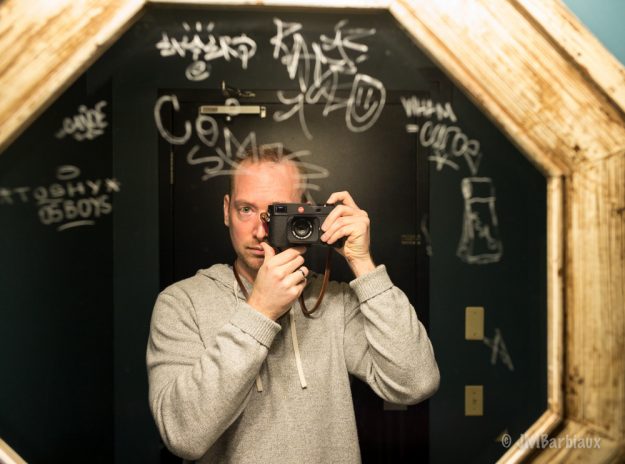 Another strong argument for the black M is that it is more sought after and holds a little more of its value.  Full disclosure, I didn’t really approach this in a scientific way…  I simply checked some second-hand prices on the Leica M240 and compared the two color options and determined that this argument’s got some legs.  For the most part, the all black Leica M240 kept more of its value (used, like new, M240’s that are all black sell for approx. 28% more than the black and silver models).  Further, I know from experience that the black models are much more difficult to acquire when a new M is released.

Next, let’s take a look at some arguments for the silver and black M.  First is its classic film look, some photographers will argue that because the camera looks like a classic film camera they are less of a target to theft (this is usually the argument used to rebut the “all black M’s are more discreet” argument.  I’ve heard some argue that the silver and black M tends to be viewed less seriously by subjects and therefore less arguments break out.  I’m not sure I’ve noticed that difference regarding the two color options but I have notice that Leica M’s are less intimidating and therefore easier to discreetly photograph strangers on the street with (compared to my DSLR cameras).

Another common argument for the black and silver is that it simply looks “sexier”.  As this is 100% relative I don’t recommend giving arguments like this weighting when making your decision.  Besides, everyone knows the black M is sexier… 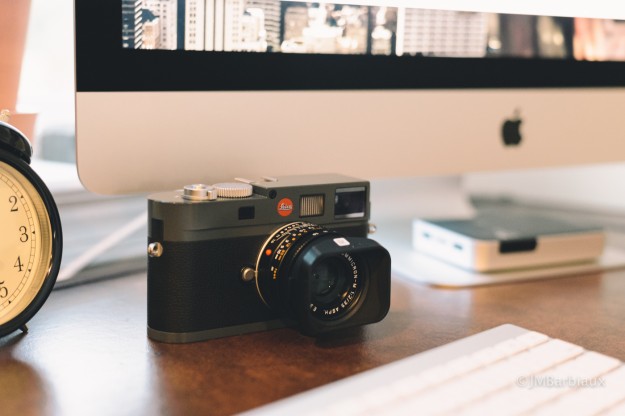 Finally, the answer to the age-old question of black vs. silver:  Whichever color inspires you to pick up your camera and get out and shoot.  I know, I know, seems like a cop-out but hear me out because there is some rhyme to my reason.  The price difference if/when you go to sell it is moot if your all black M doesn’t entice you to pick it up and take it with you everywhere you go (you can’t make money off of photos you don’t take).  Whether or not one is more discreet won’t matter if you aren’t using it.  At the end of the day, you should absolutely go with whichever color gives you that warm fuzzy feeling in your belly and makes you visualize carrying it with you everywhere you go (and causes you to do so).

Which do I prefer?  Well, if you hadn’t guessed from the photograph above, my primary is silver and black and my back-up is all black.  As for which one makes me want to pick it up the most…  It’s a tie, I carry one or the other with me wherever I go.

Feel free to leave your thoughts in the comments section below and follow along @PhotolisticLife on Instagram to keep up with my current work.

Written By
John Barbiaux
More from John Barbiaux
If you’re a fan of bugs, flowers, and anything tiny, this Nikon...
Read More
2 replies on “Which Leica M Should You Get, Black or Silver? Finally, Here Is The Answer.”