Hey Nashville, I was inside you this weekend.  Well, my wife, 16 month old son, and I were all inside you.  What an interesting time.  My wife loved it, my son loves balloons, and I was indifferent.  I’ll admit, I wasn’t super excited about photographing Nashville.  In fact, I had no intention of spending dedicated time photographing the city at all.  This trip was for my wife, she has always wanted to go to Nashville so I decided I would spend my time trying to make sure she was able to enjoy the trip to its fullest and spend some quality time with my best friend/son.  That’s what you call a win/win.

All images captured with Leica M10 and Leica 35mm f/2 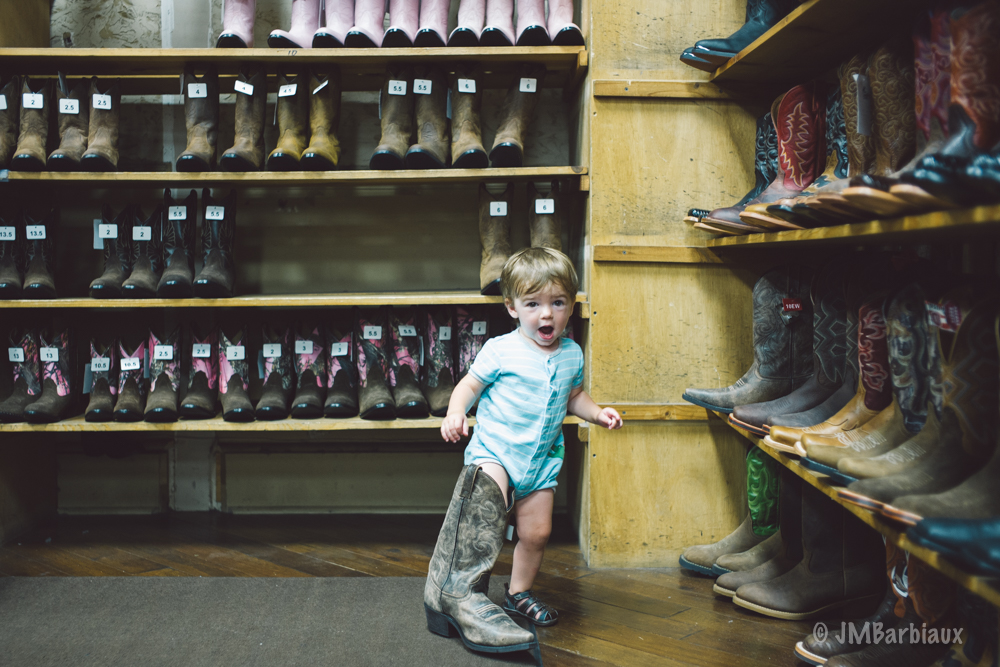 Benji gets his first pair (or three) of cowboy boots.

But John, you obviously spent some time photographing the city and if you didn’t plan on doing that how in the world did you have your camera with you?  Great observation and question, Internet!  I had my camera because I take it everywhere, I’m funny like that.  And I spent a little time, a little less than 4 hours, shooting the city because I have a wonderful wife who encourages me to do what I love even when I sometimes don’t want to.

Two hours of this “challenge” were taken while my son was asleep in his stroller.  I walked him up and down the sidewalk, stopping to take photos of whatever caught my eye, while my wife explored some of her areas of interest.  I really love “working” like this.  The other two hours were dedicated solely to street photography.  I’ll differentiate between the two below so you know which images came from which.  First, I’ll show you some of the photographs I took in those first two hours walking around the city with my wife and son. 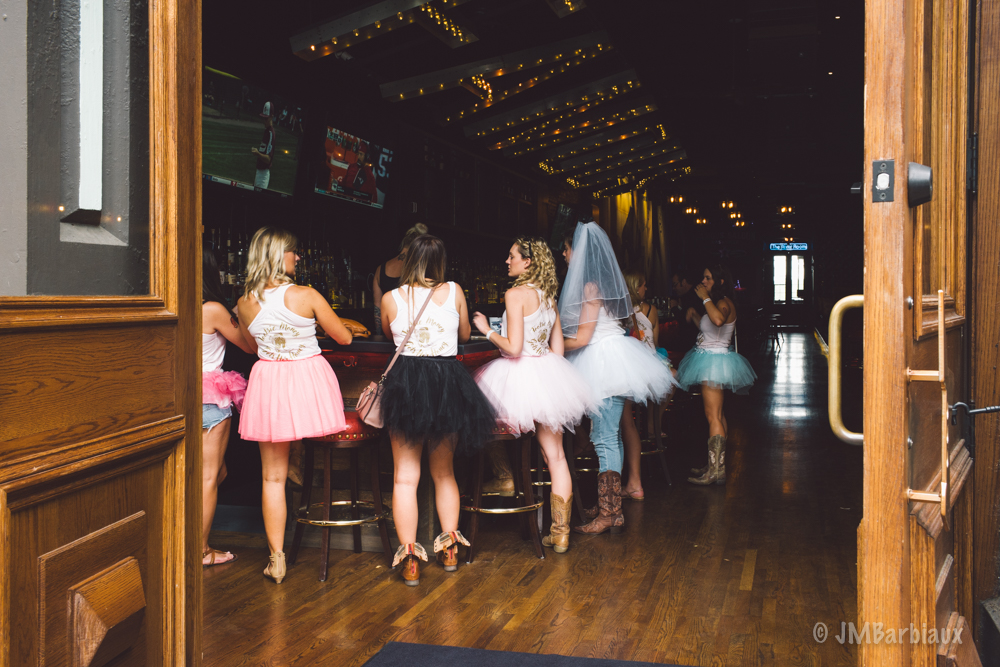 Next time you’re downtown in Nashville I’d like to challenge you to throw a stone without it landing next to a bride-to-be.  Friends I had talked to before visiting Nashville prepared me for the number of bars and live music but nobody seemed to mention the ridiculous number of bachelorette parties.  I’m certainly not judging, I think you ought to do whatever makes you happy and makes the day(s) special, but I did wonder if some of these women felt a little disappointed when they realized that every other bride was doing the exact same thing in the exact same place… 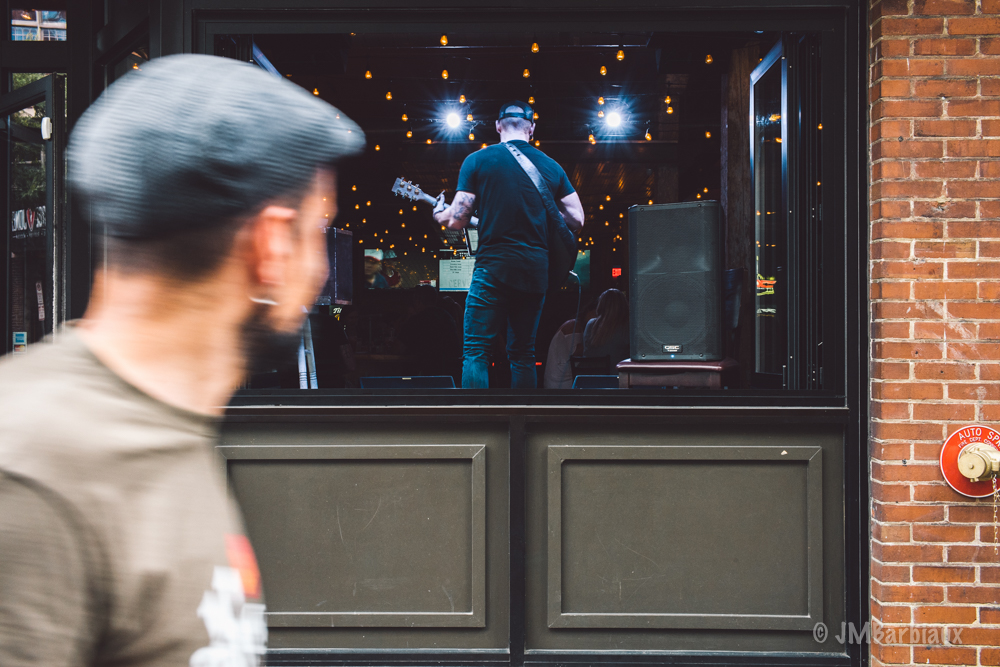 Did I mention my friends told me about the live music?  It was everywhere!  Walking down the sidewalk is kind of like walking through a kaleidoscope of sounds.  As you move the sounds change and become something all together different and eventually lines up (and becomes recognizable) as you walk directly past a performer and then mixes up again as you pass between bars. 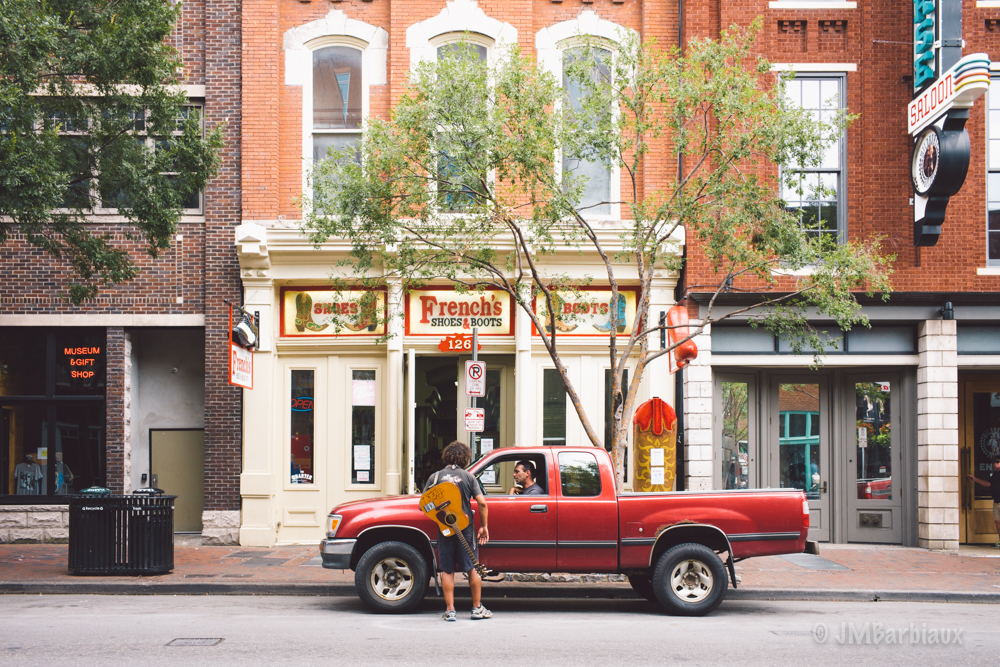 What would street photography in Nashville be without a photograph of someone wearing a guitar?  There were plenty of opportunities to photographs folks wearing guitars, they are almost as common as the bridesmaid parties.  This shot was one of about 10 shots where this guitarist moved a little and there were some random tourists walking through my frame.  I liked this image because of the limited amount of distracting elements (no tourists). 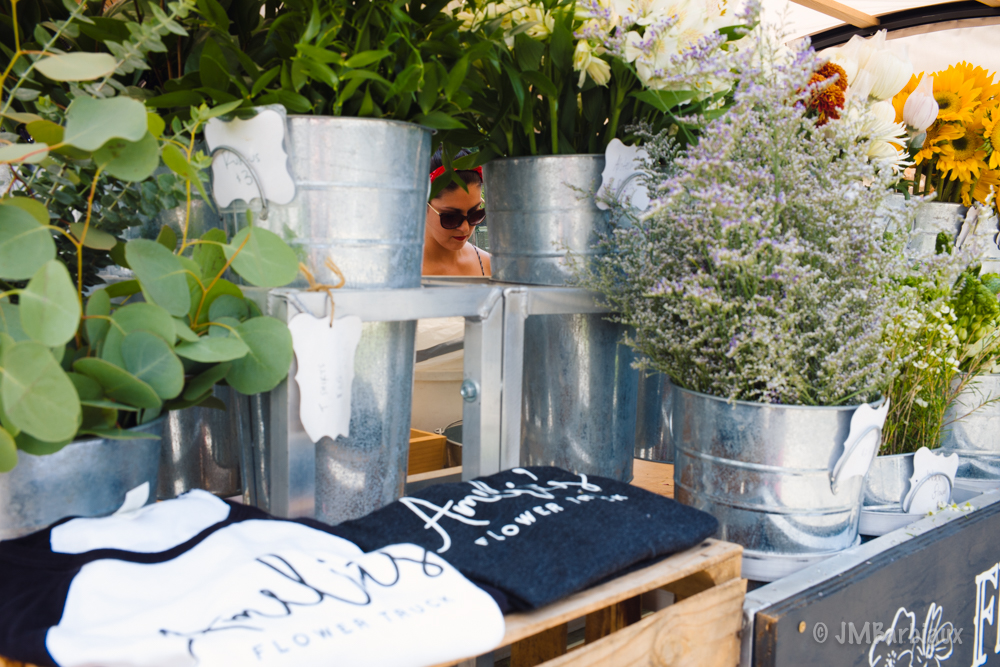 My wife was checking out flowers at a small flower stand built into an old Volkswagen (very cool) and I took a few shots of her but then noticed that I could see this woman through a gap in the pots…  So I did what anyone else would do… I took her photograph.

You’d be surprised how much ground you can cover in just a couple of hours when you are determined.  After having dinner with my wife and son I parted ways and began walking into the city from West Nashville.  My first stop was a mostly empty parking garage across from a hospital right outside of the city. 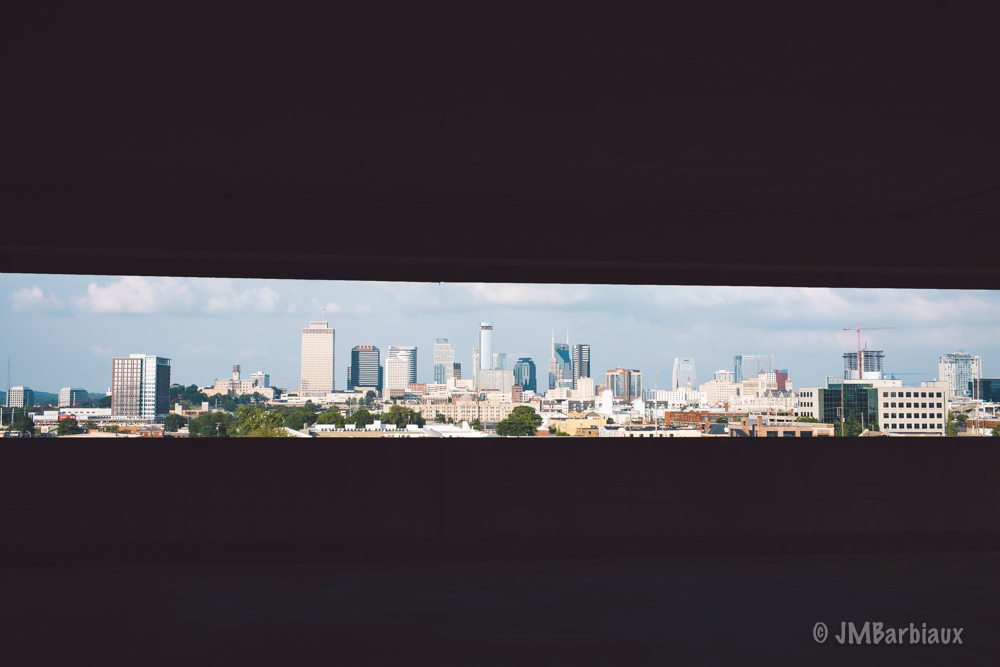 I figured the garage was a good vantage point as it was one of the tallest buildings in the area that I could easily access.  I climbed the stairs to the 5th or 6th floor for the image above.  As I was exploring this area I made a mental note that I should stop back here on my way home to see what the city looked like when it was all lit up… 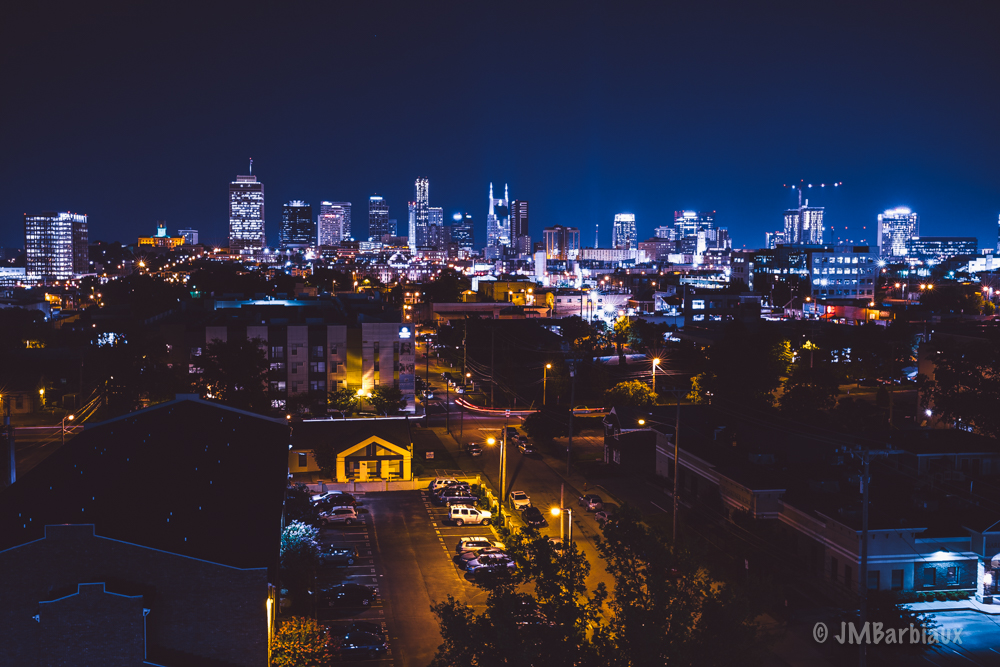 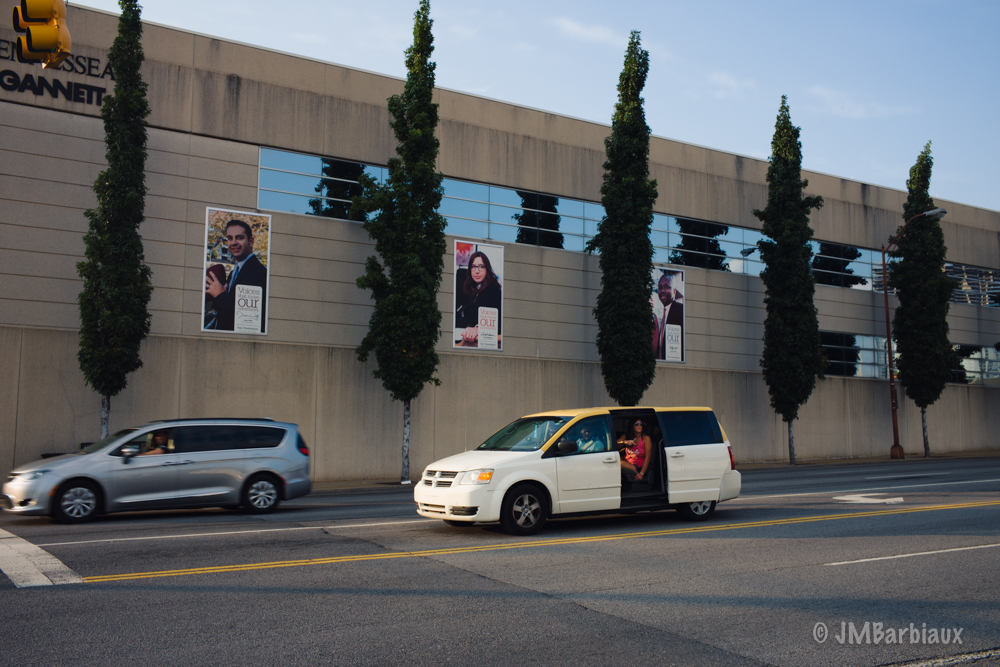 Okay, I jumped ahead above…  Let’s back up a little.  After the parking garage I made my way through The Gulch (a greenway near the railroad line) I came across this bridesmaid yelling to her friend/future bride-to-be to get into the van.  I’m not sure of the entire story but it seemed like there had been a spat between friends and the bride-to-be wasn’t interested in riding with the friend.  Juicy, right?  The van was slowly moving while she was leaning out of the door, the driver was clearly uncomfortable at one point. 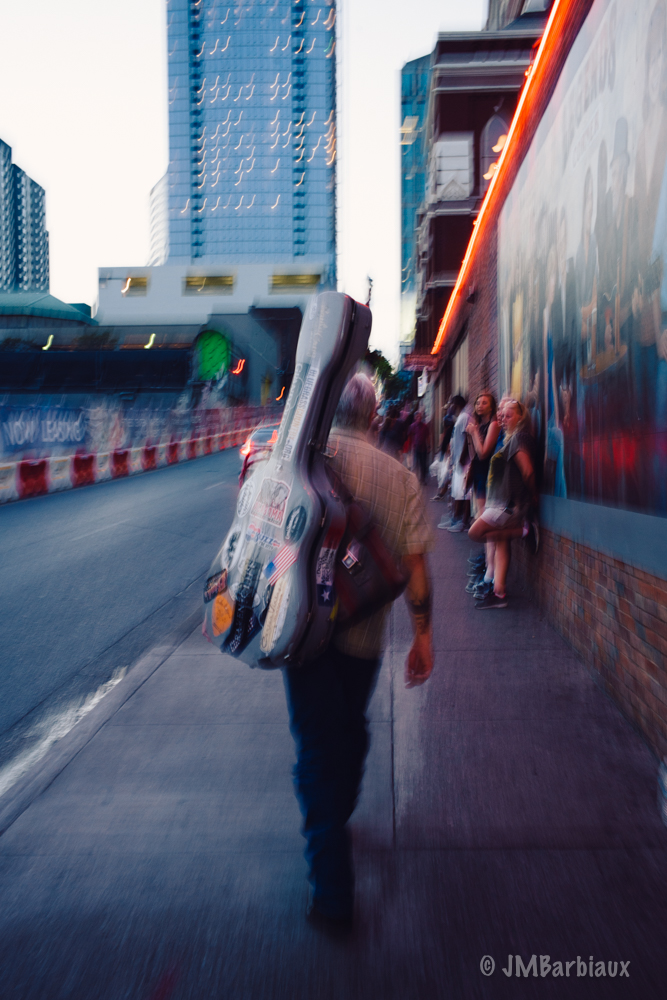 I eventually made it to the part of Broadway street where all the neon signs and hopping bars were.  I just happened to be crossing the street when this guy walked in front of me.  I high-tailed it and followed him for four or five blocks.  While following him I switched from aperture priority and auto ISO to manually set my camera to 1/15th of a second in an attempt to capture this image, an image that emphasized the feeling of walking down the street on a Saturday night in Nashville.  This is called ICM or Intentional Camera Movement, and felt fitting for capturing this man weaving through the crowds to get to a gig. 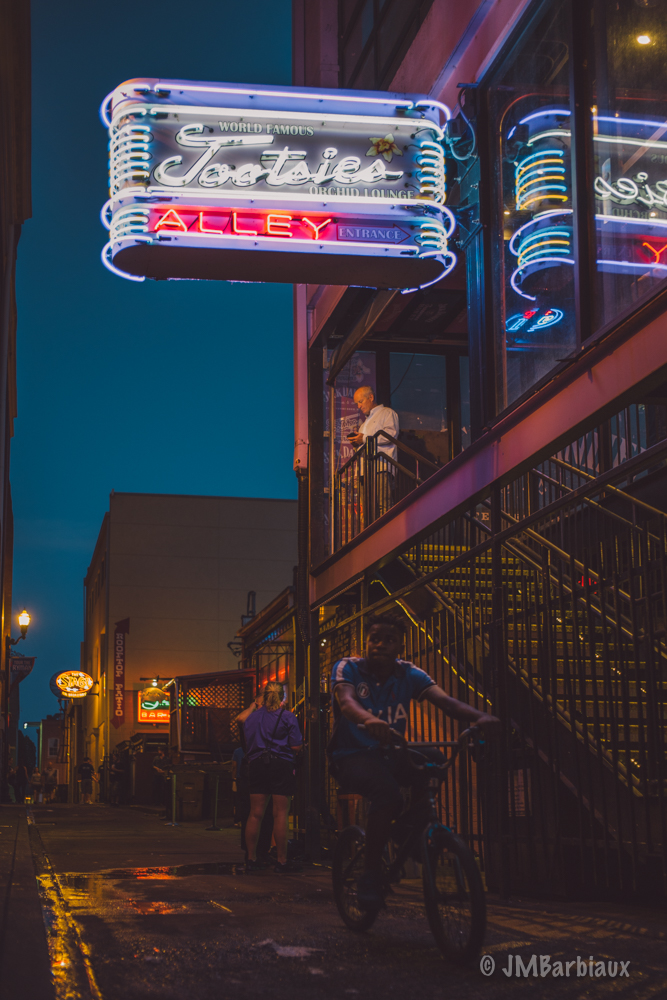 Finally, I’ll leave you with my favorite image from the time I had to photograph Nashville.  What first drew my eye to this scene was the neon sign.  The light reflecting in the puddles in the alley and the signs reflection in the window all caught my eye as well.  It certainly helped that the stairs acted as a leading line to the sign as well as where the man in the white shirt was standing, and eventually to the boy on the bike.  You see, I spent about 20 minutes waiting for the right series of events to unfold in front of me, I knew the scene was right I just needed the chess pieces to align.  I had no interest in simply photographing the sign or a single person standing beneath it…  I wanted depth and action.

For the sake of full disclosure it’s probably worth noting that I’m not a crowds person.  In fact, when I’m shooting street photography I tend to be the only photographer that ventures away from all the chaos.  I like finding genuine, candid moments off the beaten path.  That is why Nashville didn’t initially appeal to me.  It’s a beautiful city with a ton of history and potential for any street photographer worth his weight in SD cards/film.

Would I go back or recommend it as a street photography destination?  Yes.  I think that Nashville is ripe for picking for a skilled street photographer with the time and energy to do it justice.  I’m not talking about images of drunk people or random odd-looking characters.  I’m talking about real, quality street photography.  The city feels safe and there were no streets or alleys that I hesitated to explore.  I would rank this city as very camera friendly.

Please feel free to leave your thoughts in the comments section below.  Thanks for stopping by.

Written By
John Barbiaux
More from John Barbiaux
It’s hard to boil down a type of photography to one key...
Read More
3 replies on “4 Hours In Nashville – A Street Photography Challenge”