I’m a fan of all things Americana.  I love watching American Pickers, traveling out West, hitting the National Parks, and watching Sandlot.  One of my dreams is to travel Route 66 and document the vanishing landscapes/people of yesteryear.  I decided to start with the end.  Route 66 ends on Santa Monica Pier in California (though this wasn’t always the end of Route 66). 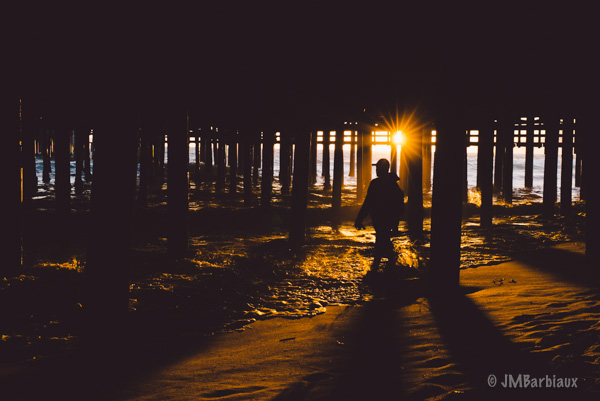 I tried (and failed) to avoid looking at others photographs before I visited the pier because I didn’t want to influence my own perspective.  I like to visit new places with fresh eyes and no expectations.  The last thing I want to do is put myself in a box and chase after someone who was here before me.  What I found after looking at a number of Santa Monica images were many were very similar.  The question was how to create an image that embodies the Santa Monica Pier area without simply photographing the pier…  Something that would share the chaos and fun that the area is known for. 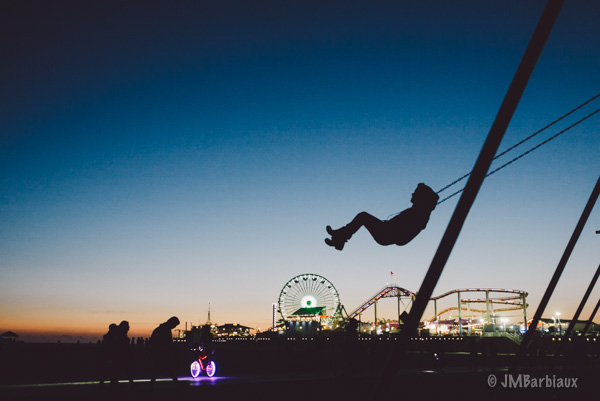 After considering what I wrote above, this is the photograph I created that checked the boxes I was looking for.  The image below is the “more of the same” image that I started with.

The next two images are of the public restrooms that are sprinkled along the beach. 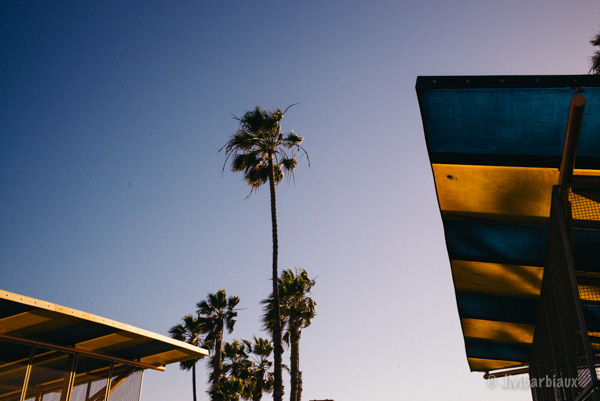 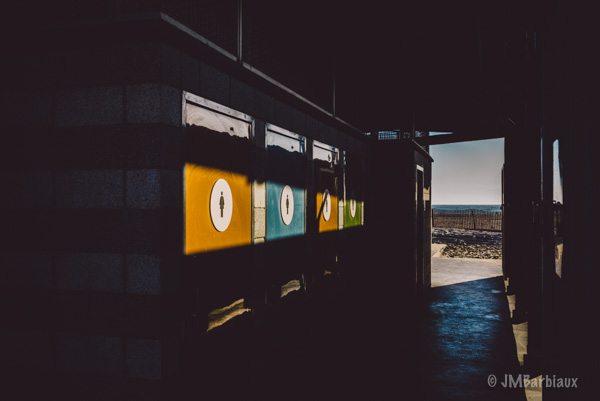 Sometimes the subject is clearly defined…  Sometimes it’s simply the light.  This shot would not have worked without the light hitting the restroom signs at just the right angle. 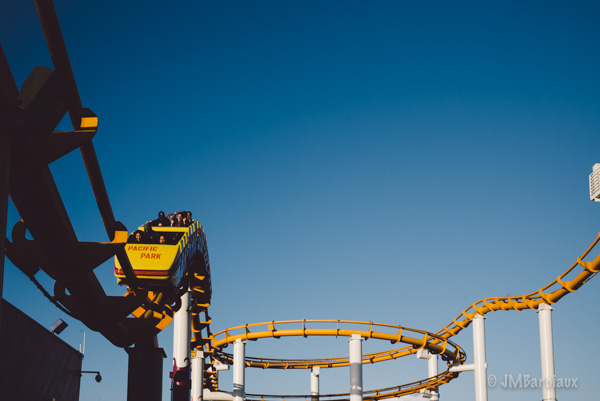 My attempt to get a more minimalist shot of the Pacific Park ride here. 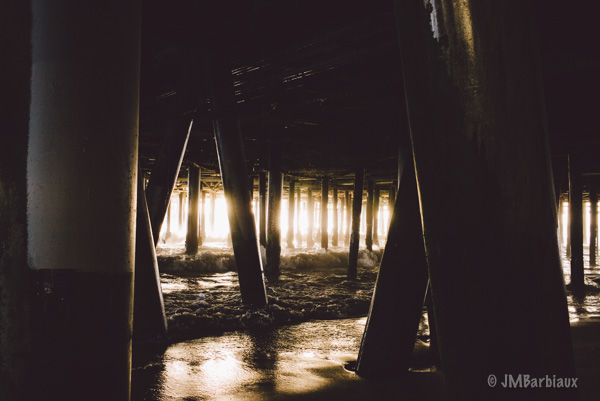 This shot and the beneath the pier shot above were taken at about the same time.  For the one above I exposed for the highlights while this shot was exposed for the shadows.  I like both but the one above has the person walking through with the star created by the sun so it is, to me, more interesting. 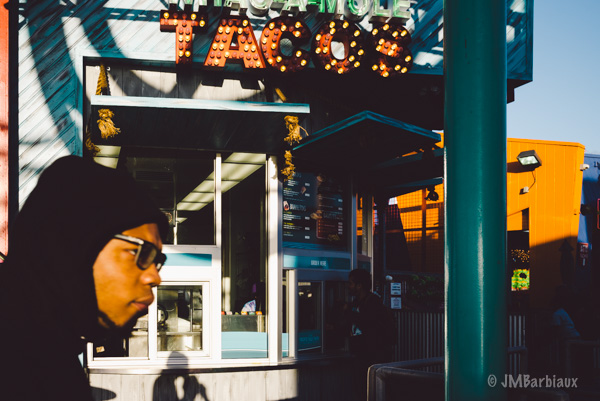 In many of my photographs I will play with shadows and light.  Here, the shadow looks to be the persons but is doing something completely different (eating).  It reminds me of the opening scenes of Peter Pan where he (or she depending on the adaptation) tries to catch his/her shadow. 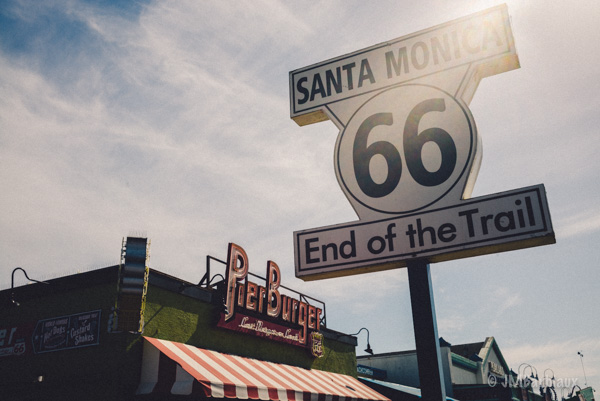 Another shot that I really wanted to capture was the End of the Trail sign that stands on the pier.  I took many different shots and many different times and settled on this one with the sun flare giving it some character. 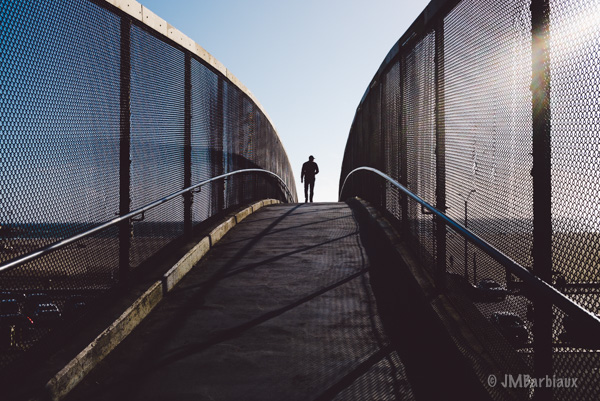 I could have spent an entire week photographing in and around the various walking bridges that cross Highway 1.  Santa Monica does a great job at landscaping and designing these crucial walkways. 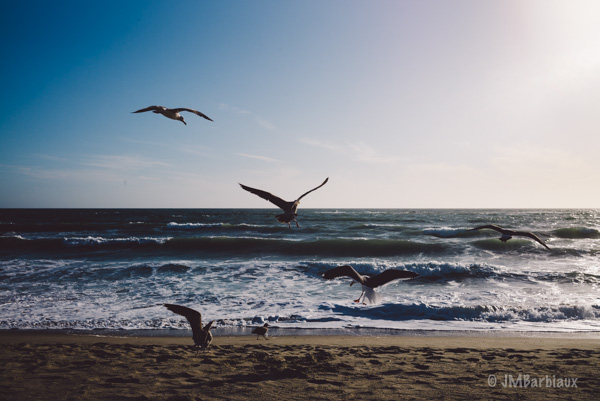 It’s not a trip to the beach without a shot of the seagulls. 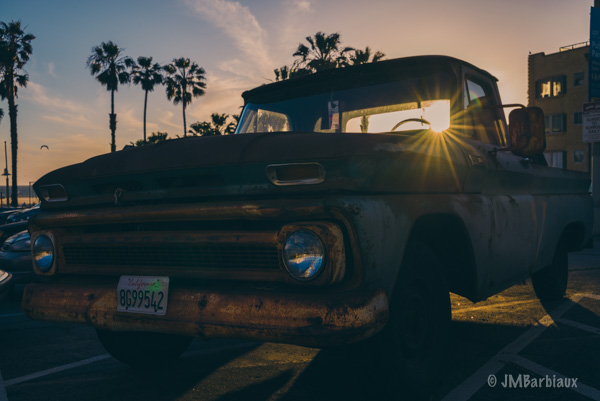 I don’t consider myself a car nut or aficionado of classic trucks but I know a good image when I see one.  This truck was in the same spot the entire time I was in Santa Monica so I’m not sure it even runs.  Thankfully it was in a great position to catch the sun setting through the back window. 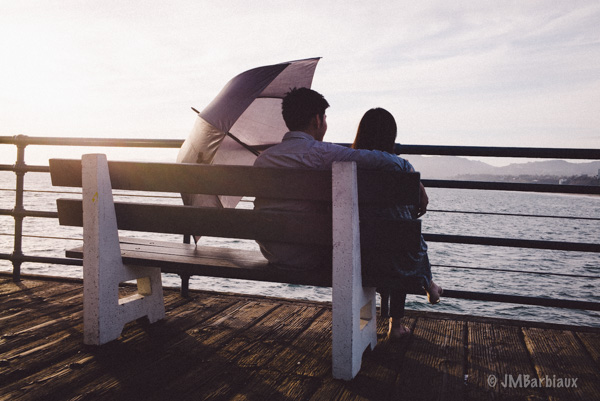 Once in a while I will share images with people after I take them…  I came across this couple taking in the sunset in such great position with the umbrella that I ended up giving them my card and telling them they could reach out to me and I would share the image with them for personal use. 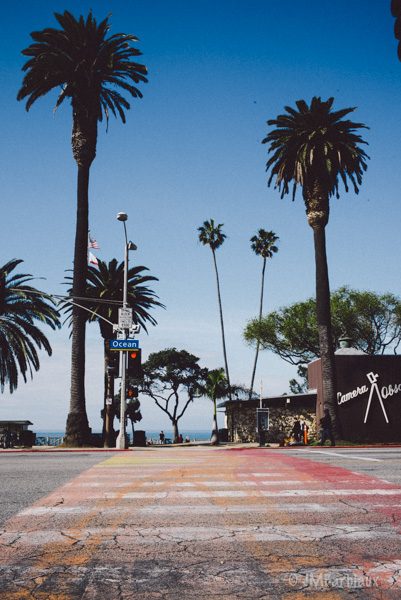 This is a shot I missed.  I wanted a crosswalk like this with the sun setting behind it but I ended up not having the time.  I always prioritize my shot list (yes, I make a shot list) and this was at the bottom because it would look nice but it didn’t really say more than “I’m a pretty crosswalk”. 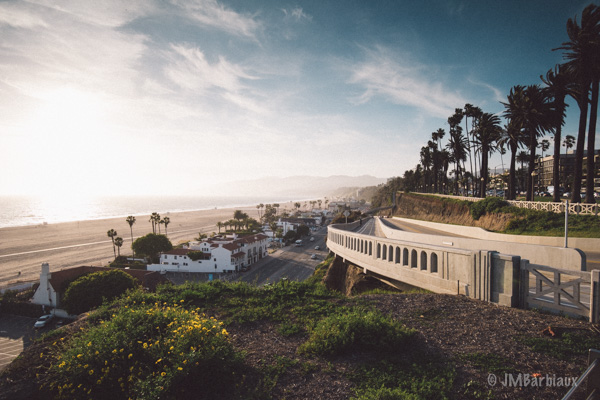 I wanted to capture highway one and the views from Santa Monica that did not include the pier. 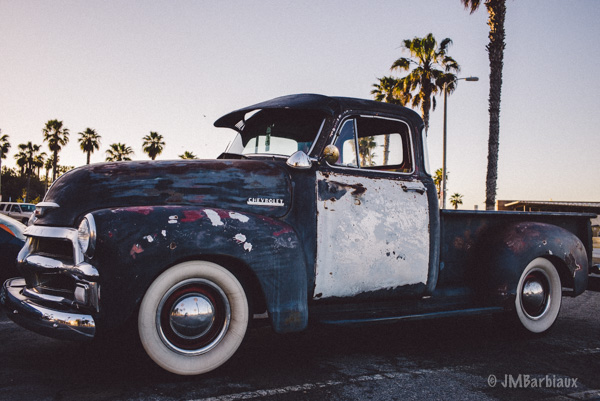 Another really cool looking truck.  Had the palm trees not been here I doubt I’d have taken the shot. 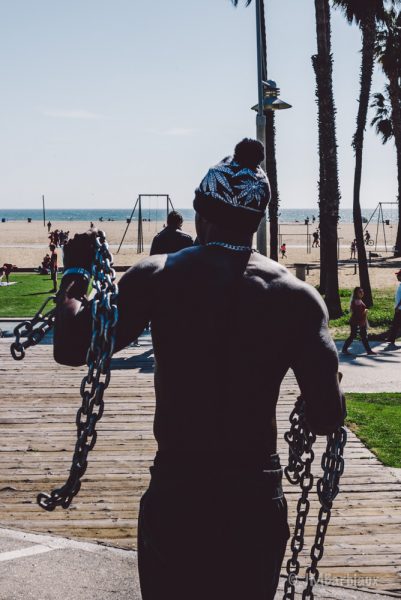 If you’re looking for a place you could spend entire days with your camera and never run out of subject matter then Santa Monica (including Venice Beach) is a great place to start.  You’ll see people from all parts of the world with all sorts of character simply enjoying life the best way they know how.  Maybe it is the beach atmosphere, but 99.9% of the subjects I photographed were warm and welcoming.

To complete the ambiance of Route 66 I stayed in a motel that was built in the 1950’s right on Ocean Ave. (the main drag that goes along the beach and Highway 1).  The first night was pleasant enough but then I got neighbors that partied until 4:30 in the morning.  I didn’t say anything because I’m the idiot that thought staying in an old motel would be fun (it would have been had I gotten sleep) without considering everything that goes along with those accommodations.  My advice…  if you want that type of experience you should book the motel for one night and stay at a nice hotel that has actual windows so you can get some sleep and have energy for the copious amounts of walking you’re sure to do.

I hope you enjoyed Santa Monica through my lens.  Feel free to leave your thoughts in the comments section below.

Written By
John Barbiaux
More from John Barbiaux
The Photo Journal is where we will feature one of your (the...
Read More
2 replies on “The End Of Route 66 Street Photography”