Recently I’ve been shooting loads of film.  Aside from the fact that I simply like the look of film better than digital images, I chose to start shooting film for the challenge.  You could say I took my own medicine in a way, as I have advocated here on the site that the only way you can truly improve as a photographer, I mean really improve, is to try new things.  Though film isn’t exactly new to me (figuratively and literally), the last time I loaded film into a camera was probably the early 90’s.  Where am I going with this?  Great question…

Since starting to shoot film I have been looking at the world differently when it comes to photography.  Film is honest.  What I mean is, if you don’t get it right in an analog camera the shot doesn’t work.  Digital cameras afford all sorts of latitude in the magic world of the digital darkroom so if you don’t get it right there is a 70% chance you could “massage” it into a usable image.  These constraints with film photography have caused me to really study light, more than ever before.  Which in turn has helped me approach digital photography from a new perspective and, in my opinion, improve my workflow.

This shot is a panoramic image consisting of 3 frames that were taken with the Nikon D810, Nikon 16-35mm at 20mm, 15 second exposure, with an aperture of f/11, at ISO 64.  The dynamic range of the D810 is shocking…  The image below is about as far as I can “massage” it before it starts to degrade. 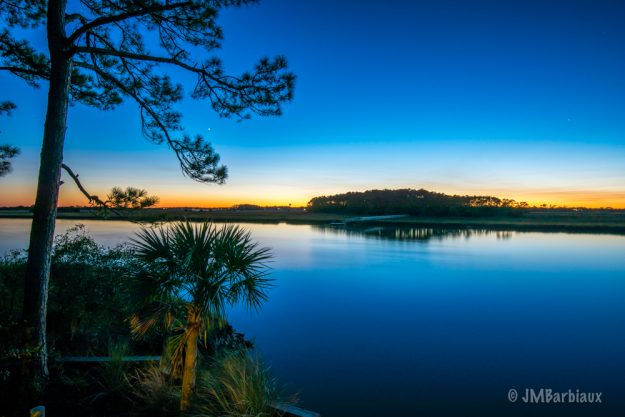 I guess what I’m trying to say is that sometimes going backwards helps us move forwards.  Deep, right?  If you are accustomed to creating bracketed images, merging them together in post, and squeezing every ounce of dynamic range from your images you may want to take note…  High dynamic range images are a huge asset for difficult lighting situations like the one above but sometimes it is best to simply take the photograph as your eye saw it.  Had I created a high dynamic range image here the photograph would have looked terrible with the distracting light on the palm tree and other elements at the bottom left of the frame.

Always remember that exposure is a relative thing.  The meter in your camera has no creative license and nobody can tell you how you should represent the scene you record.  You are the artist, the light is your paint, and the camera your brush.  Go make art.

Written By
John Barbiaux
More from John Barbiaux
I’ve taken a break from shooting with the Nikon D600 for a...
Read More
0 replies on “When Not To Create High Dynamic Range Images”