There is nothing new under the sun…  Les Brown, a motivational speaker, talks about the number of ideas and dreams that die unrealized by entrepreneurs.  The same could be said for us photographers, not taking some shots because “it’s all been done”.  But has it?  I recently encountered this age-old dilemma while visiting NYC with my wife.

My wife had never visited the Brooklyn Bridge so we decided we would cross it at sunset (with the million other sweaty tourists) and I would take a few shots.  I scoped out the Brooklyn side for a nice vantage point for a skyline shot of Manhattan but, because of construction, couldn’t come up with a great vantage point in such little time (a good case for scouting out locations before showing up to work, luckily this was a personal trip).  The shot above is the result of throwing in the towel and deciding to join everyone else and the billion other photographers who have photographed the sunset from the bridge itself. 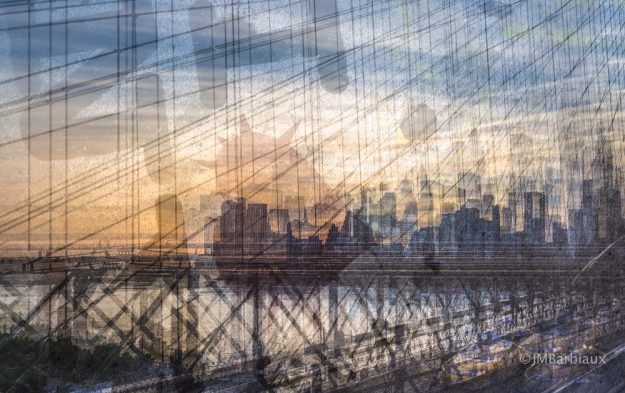 I Heart NYC from the Fractal Cityscape series.

Using this shot and a few others I was able to come up with a piece for my Fractal Cityscape series I’ve been working on (more on this in the future).  If you’d like to see a small sample of the Fractal Cityscape images you can see some of the images that were commissioned for the Union Trust Building in downtown Pittsburgh in my Portfolio here.

The point is, I could have simply shrugged my shoulders, put my camera away, and decided that since it has already been done a billion trillion times that I might as well skip it…  What new could I do?  Then I remembered the words I had heard from Mr. Brown and decided that nobody had ever photographed this particular place through my eye with my own perspective.  To not photograph a scene would be similar to letting an idea die before it ever saw the light of day.  Consider this a bit of encouragement if you’re getting tired of photographing in the same town, city, or village.

Written By
John Barbiaux
More from John Barbiaux
Everywhere you look you will see different types of light: different shades,...
Read More
4 replies on “Why I Bothered With Photographing The Brooklyn Bridge”