Back in 2014 I wrote Mastering Light In Photography – Part 1 where I touched on the different types of light a photographer will use at any given time.  I wanted to expand on this and write more in-depth about each type of light in the following series.  The first type of light we will delve into is blue…  Or, the “blue hour” to be more specific.

There are a few hours each day where the light is just about perfect for photography.  Part of this time is called “the blue hour”.  This type of light is great for landscapes and cityscapes.  The blue hour is the reason smart photographers hang out well after the sun sets as opposed to the impatient guys you see packing up their tripods as soon as the sun dips below the horizon.  In fact, oftentimes the most vibrant colors don’t occur until well after the sun has dipped below the horizon.

The blue hour is the period of twilight each morning and evening when the sun is a significant distance below the horizon and the residual, indirect sunlight takes on a predominantly blue hue. This effect is caused by the relative diffusability of short blue wavelengths of light versus the longer red wavelengths.

The blue hour doesn’t always have to be blue…  after the sun sets and during this special time there are often many different colors present in the sky.  Some of my best sunset images have occurred well after the sun would be considered “set”. 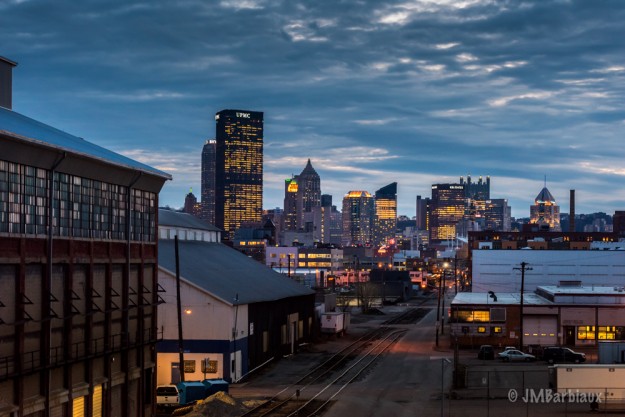 The photograph at the top of the page is a perfect example of the advantage to shooting during the blue hour.  Urban landscapes look stunning during this time of the day, the yellow glow of the building lights set against the dark blue of the sky.  This is before the sky turns completely black and the contrast between the buildings and the sky is not as strong.

Blue hour tends to have more saturated colors making it ideal for landscape photography as well.  The colors in the sky typically create a soft gradient from orange to blue (depending on things like pollution, weather, and particles floating in the atmosphere).

When shooting in the blue hour I often like to include something in my photograph, preferably in the foreground, that has a strong color to offset the blue saturation.  The bridge above works great during the blue hour because of the contrast between the dark-colored steel, the color cast from the lights, and the blue sky in the background.  An hour earlier or later and this image would not have been as appealing.

What is your favorite light to shoot in?  Share your thoughts in the comments section below.

Written By
John Barbiaux
More from John Barbiaux
“You never know until you try” reverberated in my ears as I...
Read More
0 replies on “Mastering Light In Photography – Part 2”