By all accounts the city should have been bustling last night.  There was a Pirates game as well as various events happening all around the city but yet it seemed like there was only a fraction of the normal amount of people out and about.  Sure, I came across a few crowds of people but easily lost them after only a few moments.  Or perhaps that’s simply my style, finding isolation among the bustle of the city. 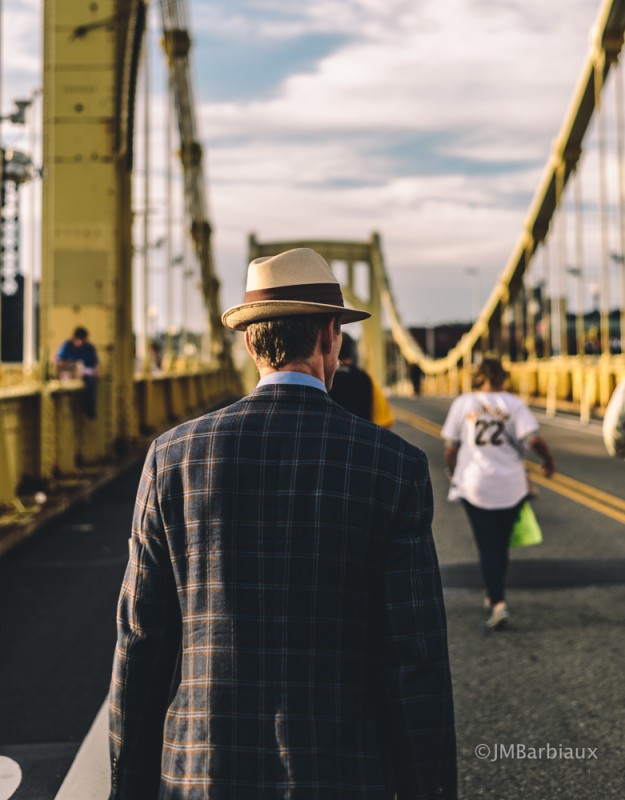 I started the evening out by crossing the Roberto Clemente bridge towards the Pirates Stadium, I never do that.  Very rarely will I walk over to the North Shore anymore, for a long time I felt like I’d photographed it to death.  When I first started photography I used to park over there and do a lot of the cityscape photographs, similar to the ones you see plastered all over pretty much any Pittsburgh Flickr group.  There’s nothing wrong with that of course, just after doing so many of those shots you tend to get a little burned out on the Pittsburgh skyline.*

* I’ve had prospective clients comment on why they were attracted to my work and more often than you’d guess it’s because I do something different than Pittsburgh’s skyline. 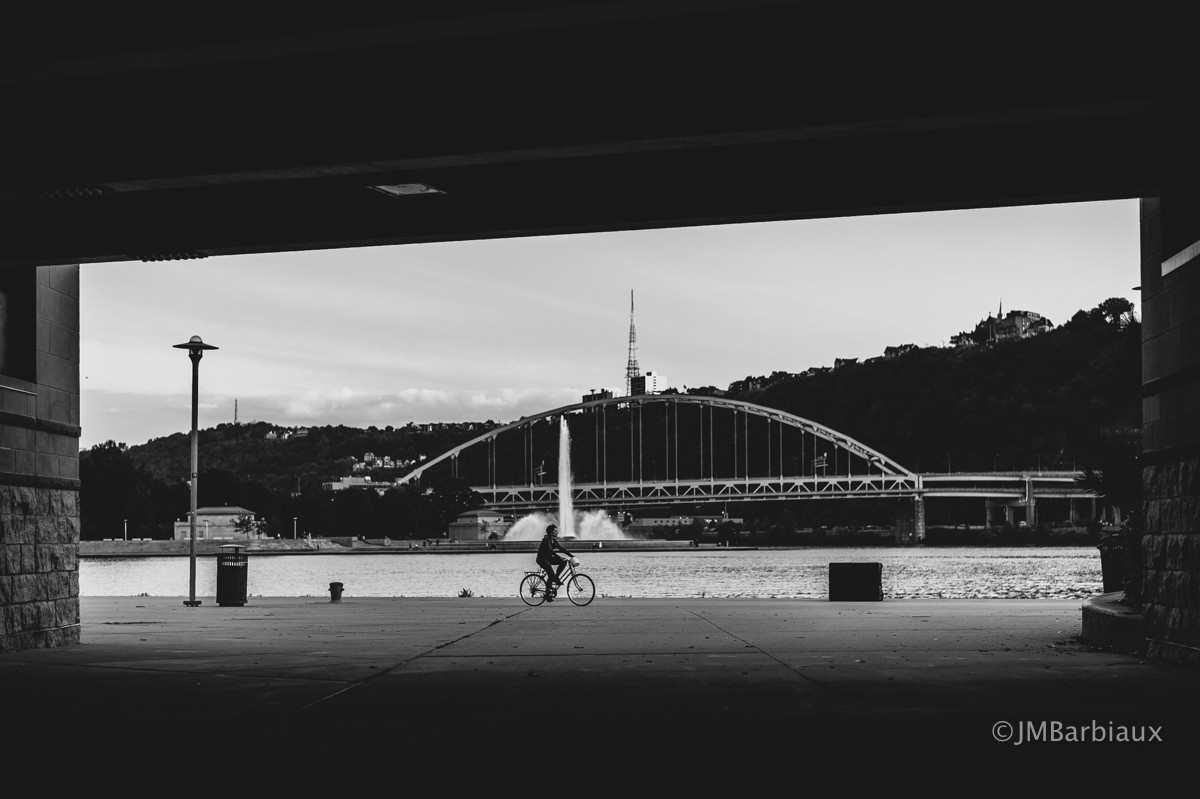 Heading towards the Science Center and Casino there is a walkway towards Heinz Field that goes under the road from the River Walk.  This shot was taken under that road looking towards Point State Park.  What caught my eye wasn’t the bike rider but the walls on each side of me and the shadow the small tunnel created.  I liked the gritty feeling of this frame. 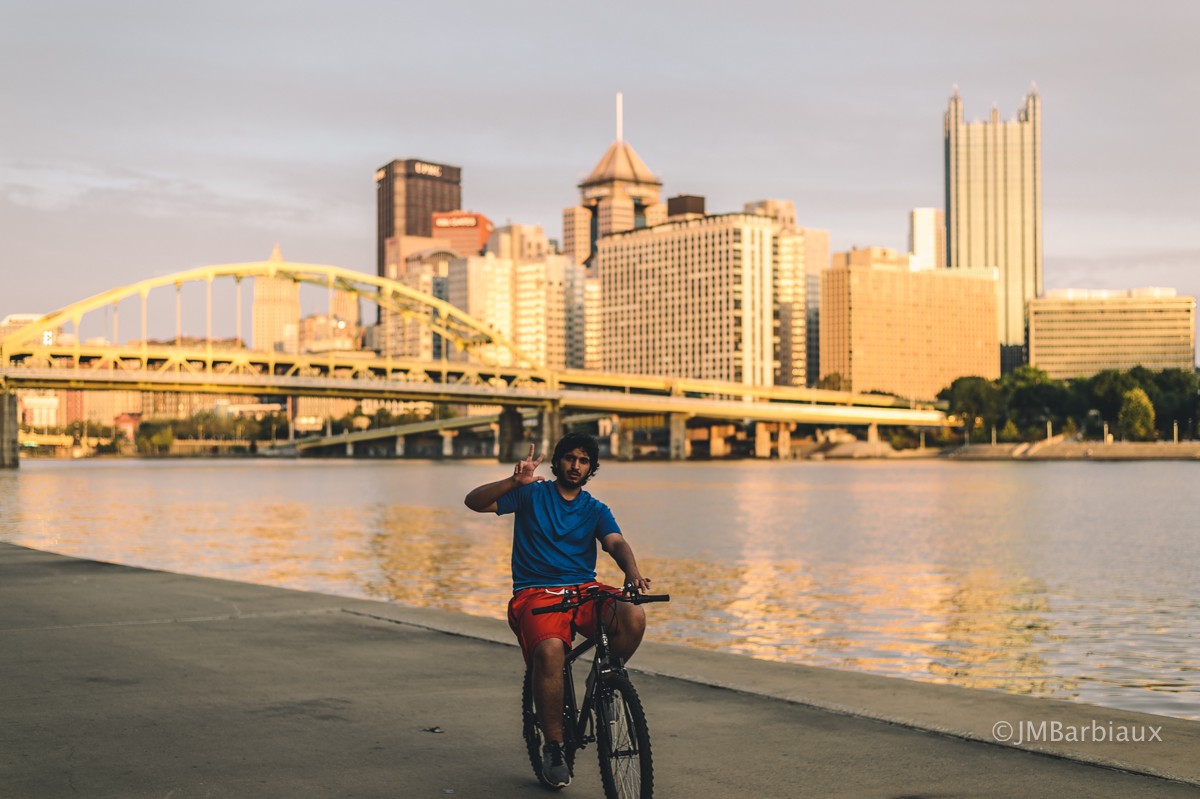 Sometimes people just love to have their photograph taken…  Who am I to deny them?  The light on the city is what caught my eye and made me take this photograph, the person was an added bonus. 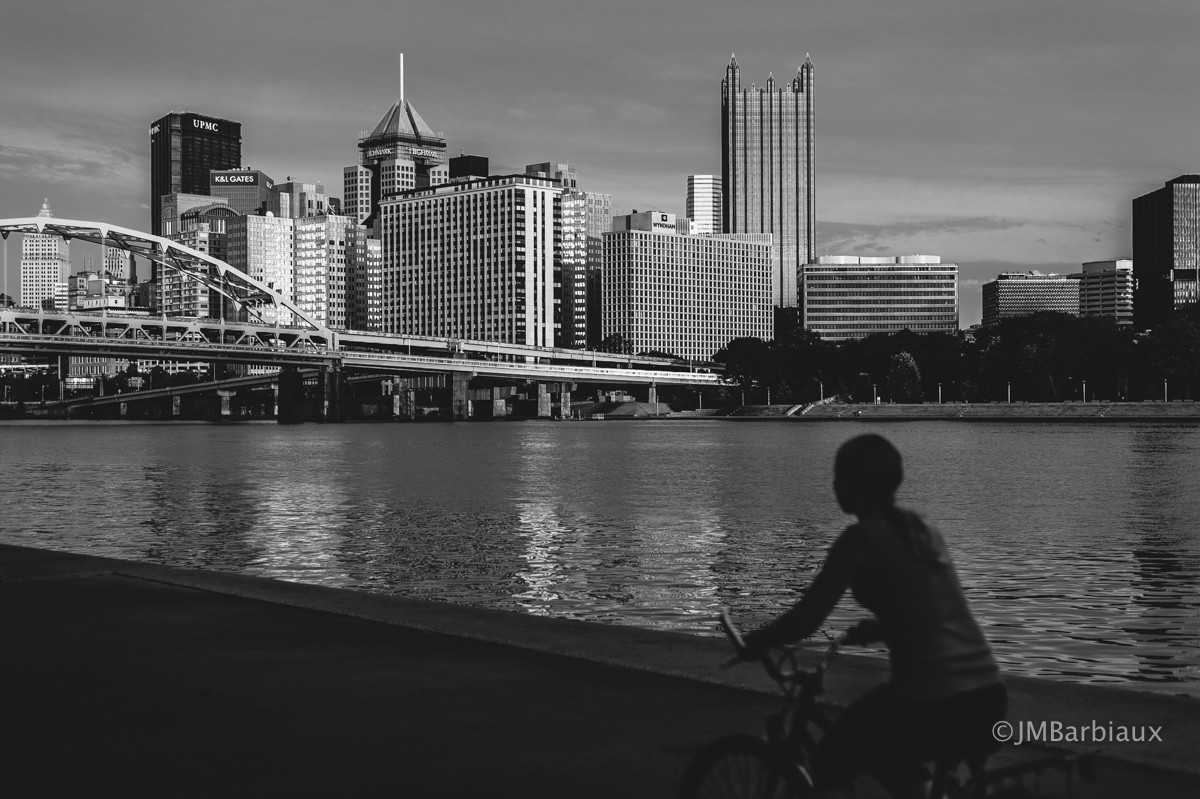 Either after or before I took the shot above I wanted to get a shot where it seemed as if someone was walking, running, or riding out of my cameras lens to the viewer.  This was as close as I got. 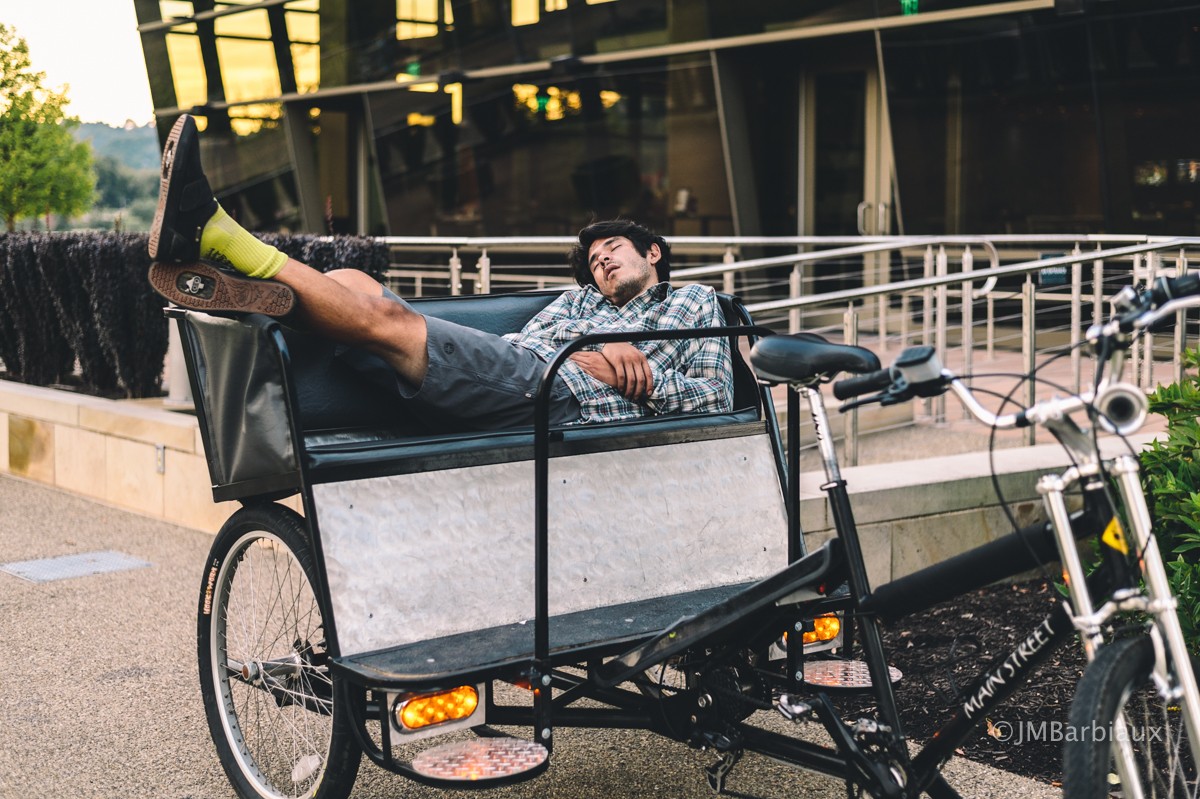 I walked towards the casino, there is a small stadium like seating area down by the river over there and I thought maybe someone would be relaxing on it, waiting for me to take their photograph.  As I got close I saw this guy sleeping on the job and thought I’d better take his photograph before someone woke him up.  His socks are what caught my attention. 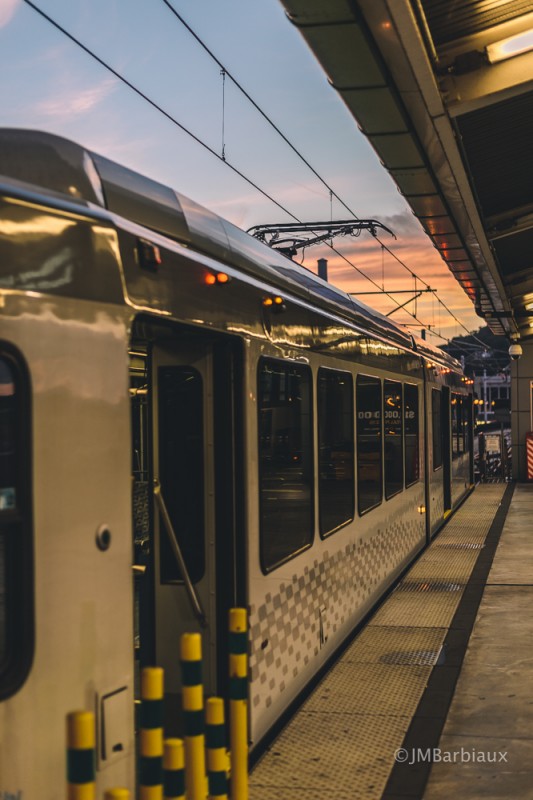 On the way back towards the city I saw the T station (our version of the subway), I had not seen the station by Heinz Field before and, being curious like a cat, I thought I’d better check it out to see if there were any interesting shots.  The one you see above wasn’t the most interesting one but the one that I liked was a little blurry (get off my back, I’m not perfect).  Either way, the sun was setting and it created a beautiful sky. 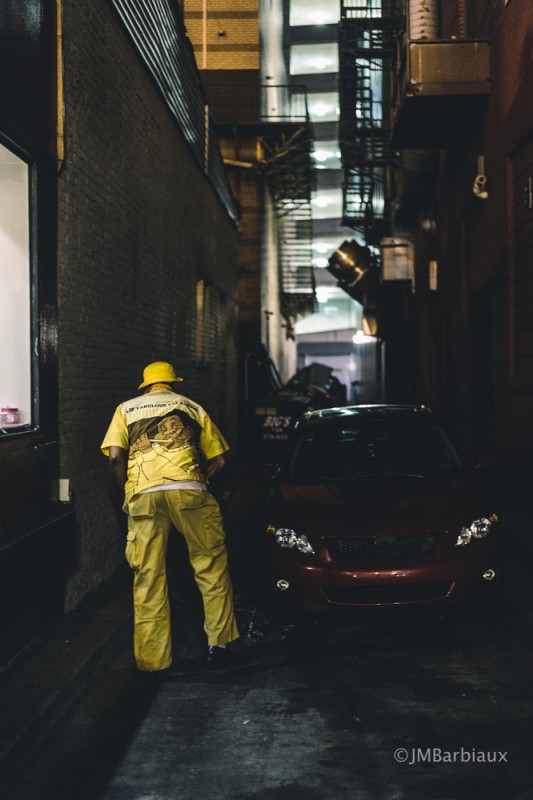 I did not realize this guy was going down this alley to pee…  What caught my eye was his Fat Albert outfit, where do I get one of those??  Anyways, I liked the shot and lucky for you, you can’t see his peep. 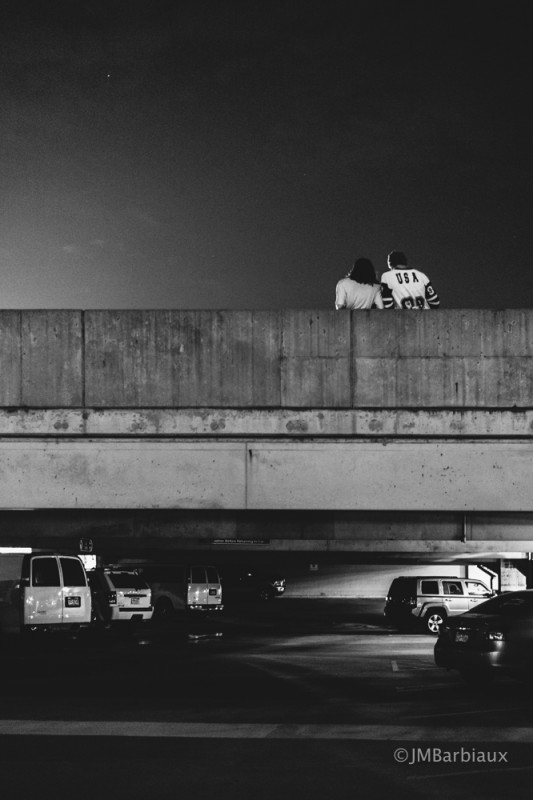 I finished the night by going to the parking garage in the cultural district where they do concerts and movies on the roof.  Unbeknownst to me, they were having a movie there that night (I was really only going there because I had parked there).  Again, curious like a cat, I thought I’d better go check it out.  I was pretty tired by then so I didn’t spend a lot of time on the roof but enough to get a few shots I really liked.

I framed the shot above a few different ways but ultimately I settled on this one.  I like the three layers; the parked cars, the cement wall, and the beautiful sky with the couple looking up at what stars they could see.  I don’t really know how to put into words the juxtaposition I see between the parked cars and where the couple is but lucky for me a photograph is worth a thousand words.

I hope you enjoyed!  Feel free to leave your thoughts in the comments below.

Written By
John Barbiaux
More from John Barbiaux
If you aren’t taking advantage of your cameras histogram then you are...
Read More
6 replies on “The Streets Of Pittsburgh – A Photo Walk From Start To Finish”