Along with being a photographer I’m also a psychic…  If you press your hand into your computer screen I can tell you what you’re thinking…  You’re thinking “Is VSCO Film 07 worth buying?”.  Now clean off the grease mark your grubby little hand just left on the computer screen and stop believing everything you read on the internet.  I can’t read your thoughts through your hand…  If you are wondering if VSCO Film 07 is worth your hard-earned cash you aren’t alone, many loyal VSCO fans are wondering the same thing.  How many different film emulations can they come up with before they cannibalize their own business?  Let’s take a look at Film 07 and see if it’s worth it.

If you’ve been following PhotolisticLife for a while now you might recollect a few articles I wrote about VSCO film (You Be The Judge – VSCO Film Packs, VSCO Film Comparisons), VSCO creates film emulating software for post processing programs as well as Android and iPhone.  There are currently seven different film packs for Photoshop and Lightroom (found here).  In the inner circle of professional photographers (that’s a thing… meetings are the first and third Thursday of every 13th month of the year) VSCO is one of only two or three film emulating software products taken seriously.

VSCO calls this their eclectic film set “Eclectic Films features a wide range of looks in our largest release to date, with 18 films and over 100 presets in total. The spectrum of this collection translates to versatility in use and includes muted, vivid, tungsten-balanced, and black and white films — all of which embody an elegant and modern aesthetic. This pack is ideal for most settings and subjects, particularly portraits, night photography, and architecture”.  Before buying this film pack I was wondering if that is a fancy way of saying “we are running out of ideas so we just put little tweaks in our film sets and repackaged them”. 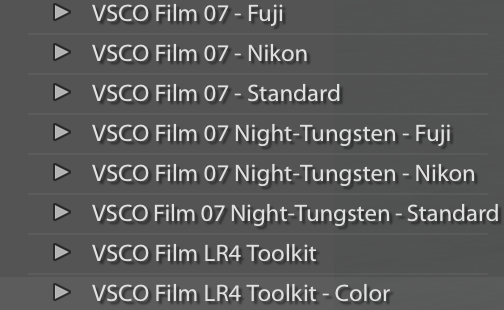 Right away I noticed something different, there were film preset menus for regular and night film 07.  The next thing you’ll notice is how incredibly subtle most of the preset are.  I’m talking hardly noticeable differences between the original RAW file and the preset.

If you look at those two images side by side the only really noticeable difference is Agfa Optima II blows out the highlights and adds a little grain.  If you continue down the list you’ll start to see some more noticeable differences with things like a hint of green or some fading (the normal suspects).  Nothing really eye-catching so far.  To be fair, VSCO says that this film pack is “more subtle and general purpose” than the others.

Jump down the film list to the first black and white selection and you’ll find Ilford Pan F Plus 50, a simple black and white that seems fairly clean-cut.  Because the ISO is so low on all of these films the grain look is noticeably different from some of the previous film packs, it’s more fine-looking.

So far, as I sample each of the films in the 07 pack I feel like it is a lot of the same.  That’s not a bad thing, VSCO film packs are incredible and I would go so far as to say every photographer should at least give them a try.  What I mean is that if you’ve got previous film packs then you may not feel like you’re getting your moneys worth with the 07 films…  But wait, there is more!

Written By
John Barbiaux
More from John Barbiaux
Inevitably you’ll come across areas where photographers have been before you…  Many,...
Read More
0 replies on “VSCO Film 07 Review”