In the photographs on this page you’ll find a story.  It’s not just a story about children and their reactions to a man in a wheel chair but it’s a story about human interaction.

If you live in the city, just about any city, there are likely less fortunate people on every busy street.  Sad signs and cups for cash held out with a grimace and a plea for a charitable donation.  Being on the streets so often, doing Street Photography work, I’ve had a chance to see the interactions between all types of people, homeless or otherwise.

I wasn’t surprised by the interaction between this homeless man and the adults who passed him by…  Not one adult acknowledged him.  Why would we?  We would be confronted with the choice of giving or not giving.  If we give we may be enabling a drug habit or other nefarious activity.  If we don’t give we may feel guilty for not helping a less fortunate person who is down on their luck.  No, it’s much easier if we look away and pretend like they weren’t there. 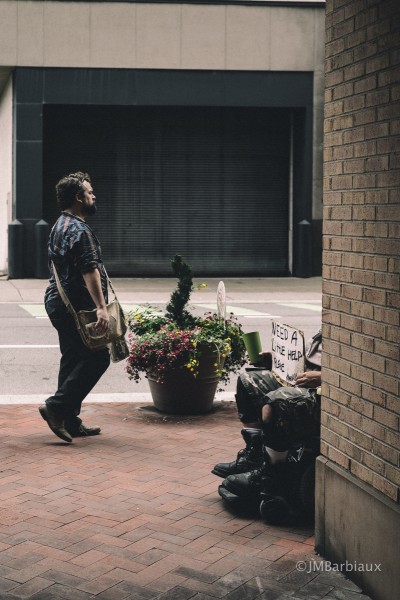 How the children reacted to the man is what stopped me and ultimately led to these photographs.  As I was walking past this man, on my way home, I noticed that as children walked by they neither turned away or feigned distraction.  Not only did the children acknowledge the man but most either smiled or interacted with him in some way (much to their parents chagrin). 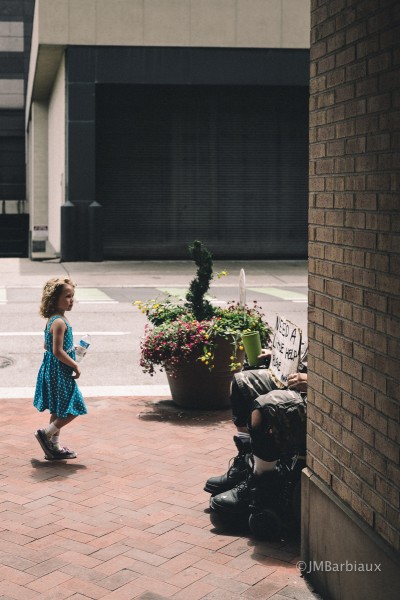 The photographs show an interesting dynamic between the homeless, adults, and children.  The homeless man was just another man to the children, he was not someone who needed to be avoided or rendered invisible by “distractions”.  This begs the question, at what age do people become jaded towards the homeless population?

What have you observed as you were out and about with you camera?  As you immerse yourself in your city, or another culture as you travel, keep your eyes and ears open and observe the human interactions around you.  Share your thoughts with us in the comments below.

Written By
John Barbiaux
More from John Barbiaux
Hello, Today’s challenge is a fun one.  I wanted to come up...
Read More
0 replies on “Using Photography To Tell A Story – A Child’s Reaction To The Homeless”