Each time I find an interesting subject I consider how best to approach it…  Not because I want to narrow down my approach but because I want to make sure I’ve captured every possible angle before moving on.  Taking photographs from shoulder height is rarely interesting, especially of everyday objects or scenery.  Sure, sometimes I probably look nuts crouching down in the middle of a bike trail but life is too short to worry about what others think.

When something catches our eye our photographer instincts kick in and we begin to bring the camera up to our eye to capture the moment before it passes…  What if, instead of bringing the camera to our eye, we brought our eye to the camera.  My natural stance with a camera is the camera down at my side, held with one hand (don’t worry, I use a wrist strap).  If I flipped things around and dropped to a knee when I wanted to take a photograph I imagine my portfolio would begin to look pretty unique.

The three photographs each have the same subject, the bike symbol.  Now Admittedly, I took about a dozen different photographs from different angles but these are the three that made it through quality control.  The first photograph you see below was taken from about waist height (I’m five foot nine inches).  The second two shots were taken from around shin height but from different sides. 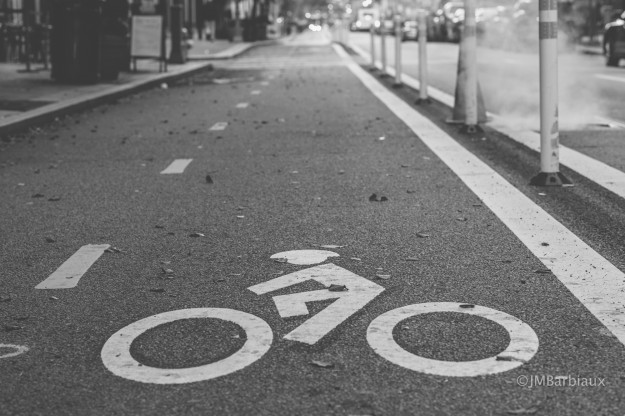 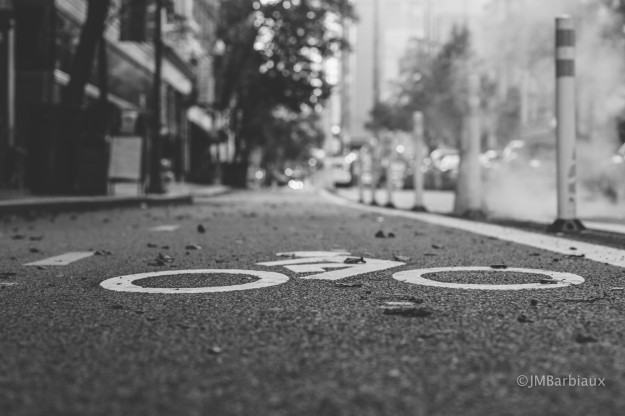 Shin Height Facing Up The Street 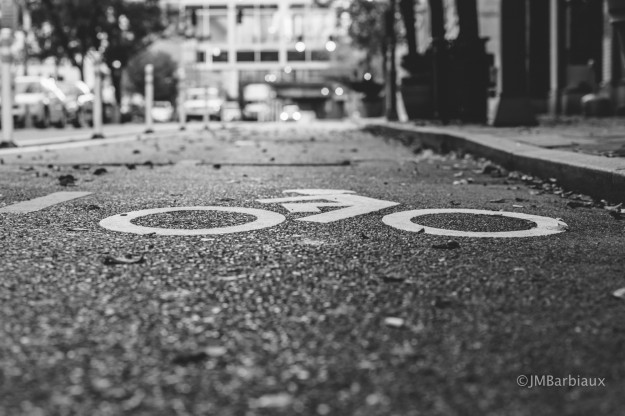 Shin Height Facing Down The Street

You may be wondering how it’s possible for the little bike rider sign to remain upright if I’ve switched the direction I’m shooting but don’t fret, they aren’t magic, there are actually two separate signs facing opposite directions for the two lanes in the bike trial.

Subtle differences in post processing can create pretty different photographs.  I’m sure you noticed that all three photographs were processed in black and white but each one was processed differently.  I’m a huge fan of VSCO film packs for Lightroom and have about 15 different choices when it comes to B+W.  Changing the Clarity, Contrast, Highlights, or Shadows can have a dramatic impact on your images.

How Do You Know Which Is The Best?

Have you ever tried to pick your best photograph for a photography contest?  How about this, I’ve been on the other side where I’ve seen someones submission and I think to myself “that’s not their best, I’ve seen their best and that’s not it”.  Your favorite image and the image that will be liked the most by the general public can sometimes be two very different things.  There are a couple of great ways to figure out which image is the better image of a set.

Technology makes it pretty easy to send (via text, email, telegram, or social media site) a set of images to a friend or family member for their honest opinion.  Just remember, the more your friend or family member loves you the more polite they will be about it.  Sometimes it’s good to start the message off with “I’m not crazy about any of these but if you had to choose one, which would it be…”, that way they don’t feel pressured to make you feel as special as you are.

Friends are a different beast all together, most of the friends I have aren’t interested in photography so asking them which is their favorite is a lot like a woman asking me which shoes she should wear… I don’t care, just get dressed so we can go!  If you’re one of the lucky few surrounded with friends who love photography then ask them for their advice, chances are they will give you pretty solid advice.

Don’t want to bother friends or family?  Peer review’s are going to be your best and worst solution for honest feedback.  For every ten honest responses you get you’re likely to get 1 or 2 trolls that tell you your photography is so bad you should end your life.  There are some pretty sad people out there… in their underpants, in their parent’s basement, trolling the internet to spread their anger around.

500px and Flickr are two of the best resources for getting honest feedback.  There are groups within Flickr (just search “critique” on Flickr) that you upload your image(s) to and they will give you feedback.  Something I learned early on is that you need to put more weight on photographers who are either equal in talent or better than you rather than listen to photographers with a feed full of cat pictures.  Unfortunately, the person that comments the most is generally the one that photographs the least.

500px has what’s called “Pulse” where depending on the likes and views the number rises or falls (rising is good).  Sometimes I’ll load a few photographs that are similar to see which one gets the highest Pulse and that’s the one that I’ll use for the site, stock photography, or contests.

I tend to spend more time on Flickr because the groups are more developed but 500px is getting better and the community there is better, Flickr can take a long time to build your followers and get feedback.

Do you have a couple of shots of the same subject that look dramatically different because of a subtle change?  Feel free to share them with us via our Submit An Article page or on Facebook.

Written By
John Barbiaux
More from John Barbiaux
Hello friends.  For those of you in the Pittsburgh area I will...
Read More
0 replies on “Try, Try Again – Small Changes Make Huge Differences”