If you’ve read about your favorite photographer or painter you’ll notice a recurring theme, they have all derived influence and inspiration from others work at some point.  I have never read about a successful artist that did not get some inspiration from another persons work.  Besides, being a great artist is as much being able to produce art as it is the ability to appreciate it.

It’s important that we, as photographers and artists, take time to absorb inspiration and influence from outlets other than our own.  Personally, I get inspiration from things as simple as a good song, book, or movie, while I am influenced by famous painters/photographers as well as random photos from readers or others on 500px and Flickr.

Limiting yourself, and it is limiting yourself, to only looking at your own photography over and over again (in the business industry we call that reading your own press clippings) will slow your growth as an artist.  Assuming you can’t learn anything from someone else is like saying you’re the most talented and creative artist to live. 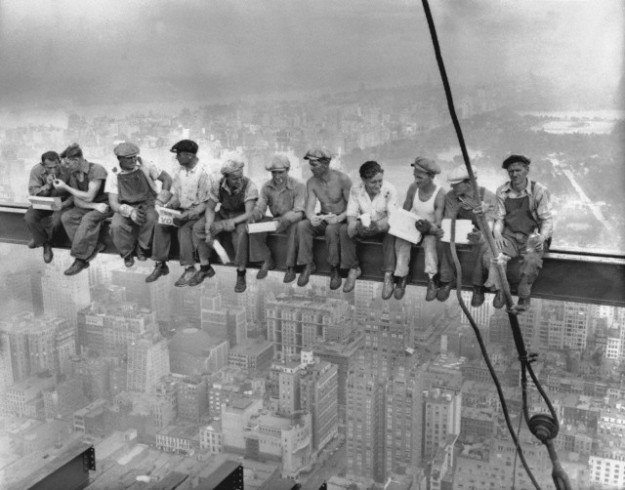 Lunch Atop A Skyscraper via Wikipedia via Bettman Archive

If you live in the modern world then there is a 90% chance you’ve seen this photograph before, it was taken atop the RCA building during its construction in New York City.  The photographer is unknown (Charles C. Ebbetts is sometimes controversially credited).  The photo easily inspires me, the danger and time involved in taking that photograph are prime examples of the work that is involved in capturing truly great photography.

This particular photograph influenced my Hard At Lunch photograph, a photograph that I would have passed on had I never studied Lunch Atop A Skyscraper.  Hard At Lunch was taken in Pittsburgh during the construction of the PNC tower this year (2014).  There are obvious similarities though it pales in comparison to the iconic image of the men having lunch hundreds of feet above the city without a safety line of any kind.

What inspires and influences you?  If you don’t know then it’s time to visit the library and read about art history.  Want to know how to create photographs that everyone will love?  Why not look at the photographs that we all love and draw influence and inspiration from them?  Don’t reinvent the wheel.  Enjoy!

Written By
John Barbiaux
More from John Barbiaux
When your trying to make lemonade out of lemons with your photography...
Read More
2 replies on “Hard At Lunch – Finding Influence In Others Photographs”