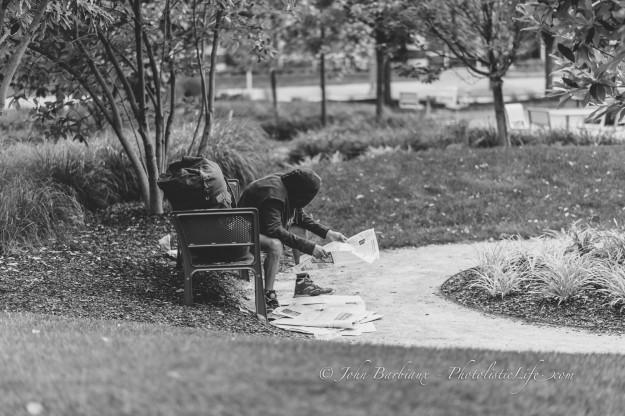 Good street photographers capture fleeting moments before their subjects have a chance to react to the camera.  Many subjects have no idea their photograph was ever taken.

Contrary to other articles, my own included, for some of the most interesting street photography shots it sometimes pays to get off the beaten path.  The two shots above were both taken in areas of the city I’ve never ventured because it didn’t seem like much was going on and you’re lucky to run into half a dozen people over a two block stretch.  What I found here were people in their element, not reacting to others and behaving much the same as they would if they were in their own back yards.

When you come across people in their own element you’ll find them acting more themselves and that makes for more interesting street photography.  Crowds are all well and fine but you’ll see people conforming to social expectations which makes for rather dull photographs.  Throw on your walking shoes and venture into the less crowded, less touristy parts of the city.  Use your head as always, don’t walk into areas poorly lit and potentially dangerous unless you want photographs of yourself getting mugged.

Which Lens To Use?

I know, the article is about FINDING the interesting shots…  So why am I discussing lenses?  Simple, if you can’t get close enough to your subject to take the shot then you aren’t “finding” it.

I once read a comment by a Flickr user, chastising another Flickr user for not getting close enough to their subjects when practicing street photography (unsurprisingly the individual doing the criticizing should have spent more time focusing on improving his own photography).  Two things were apparent after reading that inappropriate criticism…  First, getting closer to your subjects in street photography is a challenge for most well-adjusted individuals (normal people don’t really like making other people uncomfortable).  Second, a longer focal length than the traditional 35 or 50mm lens would be ideal if you’d like to stay relatively undetected.

is my go-to lens for street photography, the lens is the perfect combination of reach and size.  The 85mm lens isn’t perfect for everyone, when picking the lens you’re going to use you’ll want to consider your comfort with photographing strangers.  Try to avoid the longer, larger lenses…  Prime lenses are smaller, wider (lower f/number) and typically have better image quality than zoom lenses so that’s where I’d start.

*Wide angle lenses can distort human subjects, that’s why portrait photographers tend to shy away from them, but some street photographers take advantage of the distortion to create some really interesting, unique photography.

Limiting yourself to what is considered the best times of the day to practice photography, golden hours/blue hour, is like saying you’ll only drive on roads without bumps…  It’s silly.  Granted, photographing in the middle of the afternoon, while the sun light is harshest, can create difficulties but that doesn’t mean you won’t find great shots. 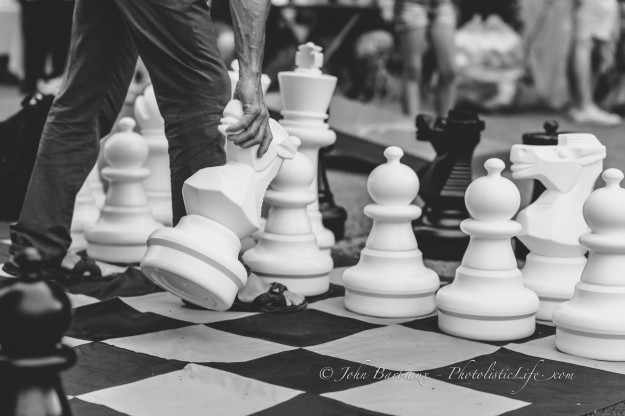 You’d be hard pressed to tell whether this shot was taken in the middle of the afternoon or late at night.  The shot was taken between two fairly large buildings so the sun was blocked and therefore there are virtually no shadows but plenty of light.

One of the benefits of street photography is the ability to capture interesting shots at any time of the day.  During the afternoon light the tall buildings cast large shadows that diffuse some of the harsh lighting (though this can create challenges as you walk from shadow to sun light) and at night you’ve got all the artificial light you could ask for in the form of window light and street lamps.

Lighting aside, I’ll shoot any time of the day but my favorite time is after the sun has set.  In the summer, after the sun has just set, everyone comes out looking for a cool place to relax and kick back.  Fountains, parks, and along the river are chock-full of various characters just being themselves.

Another benefit to shooting in the evening is everyone is out of work or school.  Socioeconomic or demographics tend to bring similar people together in small groups, very similar to “clicks” in high school.  What’s interesting is that if you watch them long enough someone is bound to do something interesting (i.e. stupid) which makes for a great photograph (insert something about group mentality here).

This is where opinions differ widely amongst the “street photographers” out there.  Is a shot of a person walking across the cross walk an interesting shot?  What about a random stranger smoking a cigarette on a park bench?  A homeless person with a change cup?  I think an interesting shot has to contain something that grabs attention, something that does not conform with the norm.  Think the classic red umbrella amongst a sea of black umbrellas…  I consider whether, at the press of the shutter, I’ll capture something interesting or just take up space on the SD card.

Remember that people who view the photograph, who weren’t there with you, won’t have the same thoughts running through their minds as you did.  If the photograph has a special meaning to you but only because you know what was going on off of the frame then consider the fact that your viewer won’t have that back-story.  If a specific shot really jumps out at you because it reminds you of a special memory you’ve had then great but remember that there is a really good chance that people viewing that same shot didn’t have the same experiences you have.

Written By
John Barbiaux
More from John Barbiaux
There is nothing new under the sun…  Les Brown, a motivational speaker,...
Read More
0 replies on “Street Photography – Creating More Interesting Images”