In my third, and final, article on shooting live bands I’d like to talk a little about interacting with the artists you are shooting, being aware of your surroundings, and how to keep your eyes open for great shots.

As a teenager, I became obsessed with music.  Just listening to music wasn’t enough, I had to consume every detail I could find.  This led to lots of purchases of Rolling Stone, Guitar World, Spin…  You name it!  As I would pour through these rock and roll bibles, I would be in awe of the great photos that accompanied the articles and how awesome the artists in them looked.  I didn’t realize it at the time but I was already educating myself on what a great photo should look like.  All these years later, I’ve went from wanting to be the guy in the photos to wanting to be the guy that took the photos! 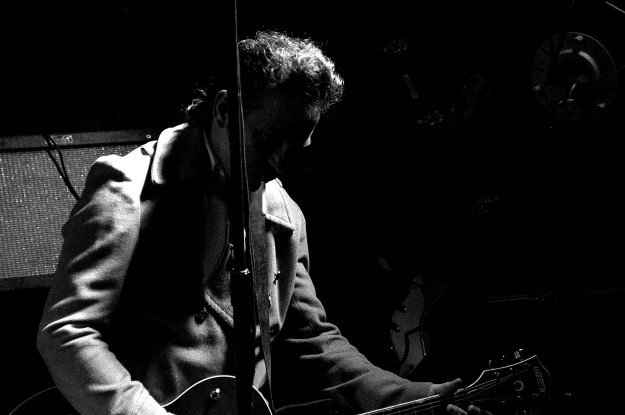 The great thing about photographing musicians is that most of them grew up reading those same magazines I mentioned, seeing those same, awesome photos, and dreaming of someday having those kind of photos taken of themselves.  I’ve yet to meet a guitarist who didn’t absolutely love having a shot of his hands playing the guitar, like some classic Stevie Ray Vaughan photo.  This makes the task of finding willing subjects pretty easy for you! 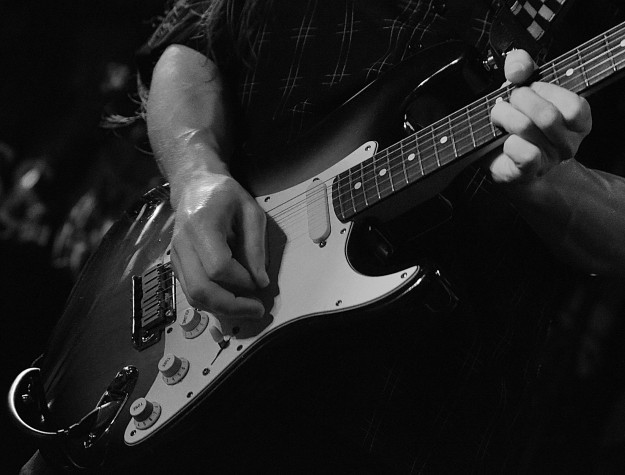 If you are looking to shoot local bands, about all you have to do is show up.  I haven’t found any bars or clubs in my area that don’t allow photography and I’ve yet to run across a band that had a problem with it either.  That’s not to say that you might not run into an Axl Rose, but it’s pretty rare.  Another reason bands are happy for me to shoot them is that I offer them the use of my photos for any marketing needs they may have, this is totally up to you.  You may decide to charge for use of your photos but my rule has been, if I come out and shoot without the band asking, I let them use the photos.  If they ask me to come shoot, then it’s a job and I will charge for my services.  Again, do what you feel is right for you in your situation.

Now when you decide to start photographing touring acts and at larger venues, things get a bit more complicated. As I mentioned in my last article, most larger bands will have a “no flash photography” rule so you need to be prepared for that with the right equipment.  Additionally, some bands might ban photography outright, or the venue itself might not allow you to bring a camera in.  These are things you need to find out beforehand.  The last thing you want is to spend money on a ticket, drive to the show, only to have to leave your camera in the car.

Okay, you’re in the venue, the band is stoked that a photographer is there (making them feel like rock stars), time to start shooting!  I always try to get to shows a bit early, as it allows me time to introduce myself to the band, get a feel for the room, and most importantly, get shots of the band setting up.  Often, these can be some of the best photos of the shoot!  This is when you’ll get to take photos of the instruments sitting on stands, candid banter between band mates, and players tuning up.  If you’re friendly, and ask nicely, the band might even allow you to step onstage so you can get some more close up shots (especially on the instruments).  Just remember, these guys are there to do a job.  Do your absolute best to stay out of the way and let them get to work.  Otherwise, you might not be as welcomed the next time. 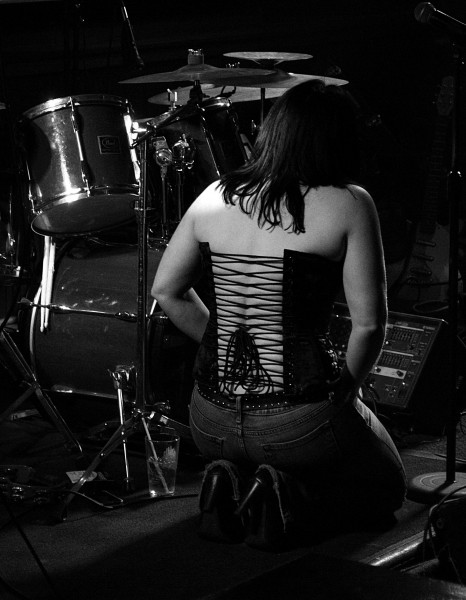 And that brings me to my next bit of advice: Be aware of your surroundings!  It can be really easy for us to get lost inside our view finders and lose track of where we are.  There are a lot of obstacles at a show and you need to keep an eye out at all times.  If you are shooting from the crowd, try not to run into people or block their view.  If you happen to get the chance to shoot from the stage be wary of cables and mic stands.  The last thing you want to do is yank the guitarists cable out or knock over a mic and bring the show to a grinding halt!  Also, be respectful of other photographers, even if it’s just an audience member taking a pic with their cell phone, try to stay out of their shots and don’t hog up one area for too long.  These things are just common courtesy, plus you never know if the guy you irk today may one day give you a referral for the next gig!

I approach concert photography like rock and roll, or good jazz. When I am shooting a band, I’m as deep in the music as I would be if I were onstage, playing an instrument.  I am “jamming” with the band, only with a camera instead of a bass guitar.  Listen for the ebb and flow of the music.  Is it a fast paced song?  The musicians are probably going to be moving around or dancing.  A slow number?  Good time to capture the expressions on their faces.  Watch for the little cues the musicians give each other, usually it will be a subtle glance or head nod.  It might be the guitar player using the neck of his guitar to “direct” the band.  These things will let you know that something is about to happen and you’ll be ready to capture it. 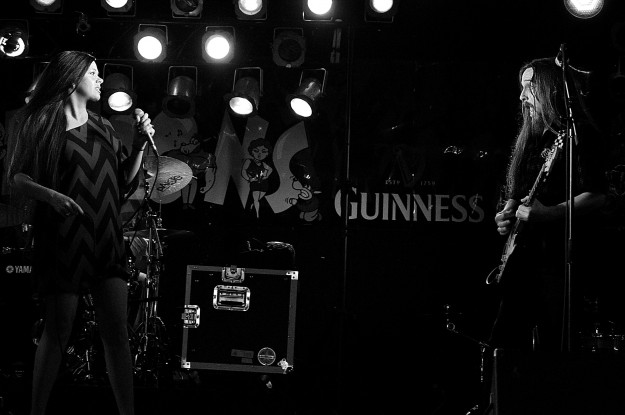 Another word of wisdom is to move around.  Don’t just camp in one spot, shoot from every area in the venue you can.  This might be easier said than done, especially if you find yourself in a press row with other photographers at a big show.  In that case, you may have to work with what little room you have, but do your best to switch up your angles.  Front and center is obviously great for getting shots of the whole band, but one of my favorite places to shoot is from the side of the stage.  You can catch some really compelling profile shots here, and also play with your depth of field to put certain players in focus while blurring others out a bit.  It can also be cool shooting from in the middle of or behind the crowd.  Getting the tops of some heads in the foreground can make the viewer feel like they are standing right there at the show! 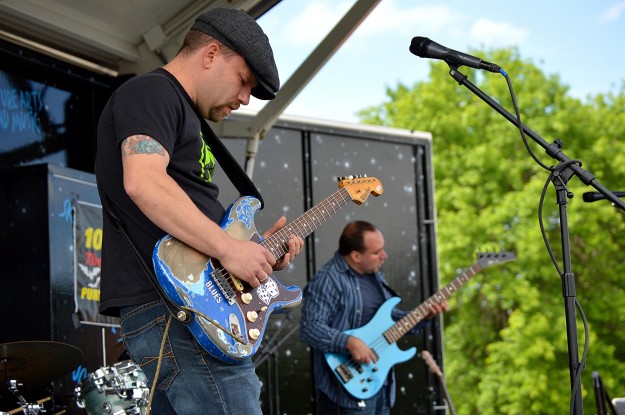 One easy way to get great, expressive, shots of musicians is to show them that you are digging what they do.  These guys are there to entertain, and if you let them know that they’re doing a good job they will almost always take it up a notch.  Again, don’t get stuck inside your view finder, cheer and clap at the end of a song, or throw up the “metal horns” after a great solo (Here’s a little secret: All musicians like getting the “metal horns”.  Even a jazz trumpeter will get a kick out of it :P).  The more you show your appreciation, the more likely the band is to perform for YOU.  You might even get a little personal show from one of the members.  Make sure to smile and nod to let them know you are grateful for them posing for you. 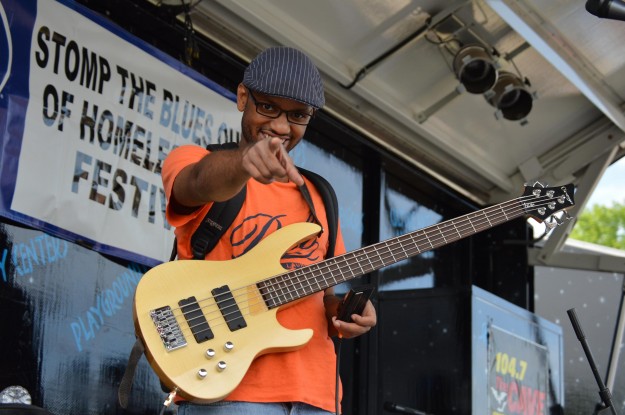 My photography mentor is a man named Robert Vasquez.  One of the most important things he ever said, and words I carry with me to every show, is “Shoot fearlessly”.  Do whatever you have to do to get the shot.  Don’t be afraid to lean over a rail, or jump up on a chair to get the angle you’re envisioning.  This might sound contradictory to what I was saying about being respectful of others and your surroundings but I believe you can do both, you just have to find the right balance. 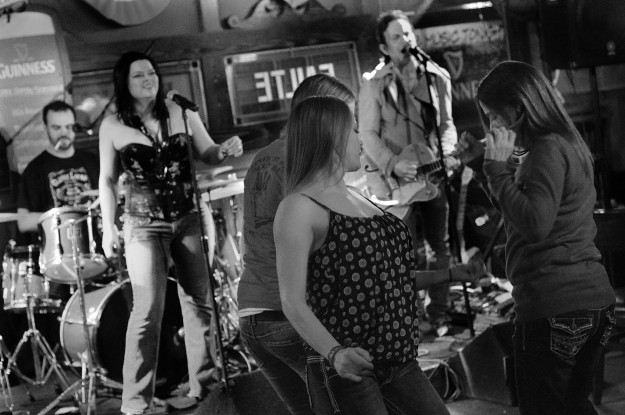 Above all, have fun!  If you love music and you love photography, what could be better than combining the two?  You might be able to sell your photos to a music magazine or website.  Or have the band book you to shoot their next album cover.  Even if all you get are some rocking photos for your portfolio and an evening listening to good music, how can you beat that?

I hope you have enjoyed this series of articles on “Shooting live bands” and can take something from them.  I appreciate John and the staff at Photolisticlife for allowing me to write them, and I look forward to contributing more in the future!  In the mean time, if you have any questions or feel I missed something, feel free to reach me via the links below or leave a comment!  Now go shoot!