Breaking compositional rules is difficult, it seems like for every rule someone breaks there is already a rule defining what they did to break it…  Sorry you rebels, you free spirits, you mavericks.  Don’t fret, it’s actually a good thing, it means that someone else has already named your technique so we don’t have rules with ridiculous names like “Rule of Thirds In A Half Divided By Pi.”  Enter compositional balance, a technique that enhances the Rule of Thirds.

First, a quick definition of the Rule of Thirds provided by our friends at Wikipedia:

The Rule of Thirds by itself is great but can sometimes leave a photograph feeling a little empty.  Using balance is adding an element to the photograph in an area of the frame that well “balances” the image.  The photograph at the top of the page incorporates this to a degree, I could have balanced the photograph by including a subject in the background further to the right of the main subject but as in most photography I worked with what I had.  Without balance your photograph can still look great but can also look off-balance.

The image looks a bit off-center and empty, I still enjoy this image but it feels a bit off-balance to me.

Another example of a balanced photograph: 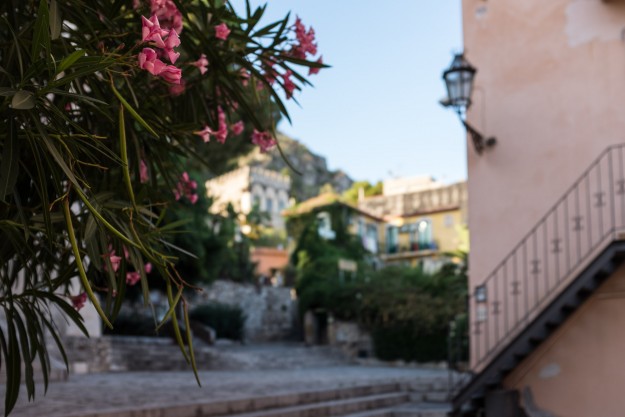 The flowers are balanced by the pinkish wall on the right even though the wall is slightly out of focus.

Adding balance to your photograph does not mean you need the subject that is adding the balance to be on the same focal plane as your primary subject, I believe it actually looks better if that is not the case.  I like to put my balancing subject outside of the focused area so that it does not become distracting.  Speaking of distracting, try not to use something that is a huge contrast to your subject or it will pull viewers attention away from what you want to be the center of attention.

Written By
John Barbiaux
More from John Barbiaux
So your tired of watching television on your 27″er from college? Want...
Read More
0 replies on “Compositional Balance”