Photo and Story by Goran Jovic 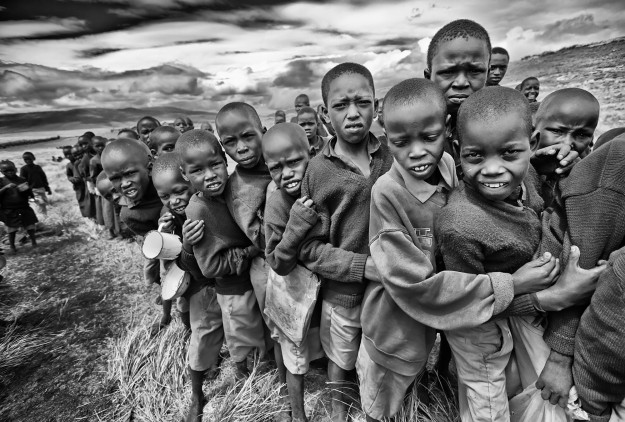 The photo was taken during my visit to the local primary school in Sendui village in Ngorongoro region.  While the children were at school, I was talking to a cook whose kitchen is in a small house next to the school.  The kitchen is an unusually dark space where he was cooking a usual meal – corn mash.  Suddenly I heard a strange noise and I ran out of the kitchen just to see the crowd.  Actually, there were about 300 pupils who were pushing each other and trying to be the first ones to taste their everyday meal.  Also there was their teacher with a stick who was yelling at them and sending them back to the line.  I breathed in to gather my emotions then I set the aperture and I did not do any other adjustments because I did not want to lose the moment I wanted to capture.  This was a completely different moment when it comes to children and photography because they usually act curiously and excitedly when they see a white man and his camera.  However, this time they were focused on food and they did not pay much attention to me… they were waiting for their ‘Pot of Gold’.

Time is almost up, get your Photo Story Contest submissions in ASAP by clicking here.  Remember that social networking plays a role in the judging process, be sure to have your friends like the dickens out of your submissions.  Enjoy!