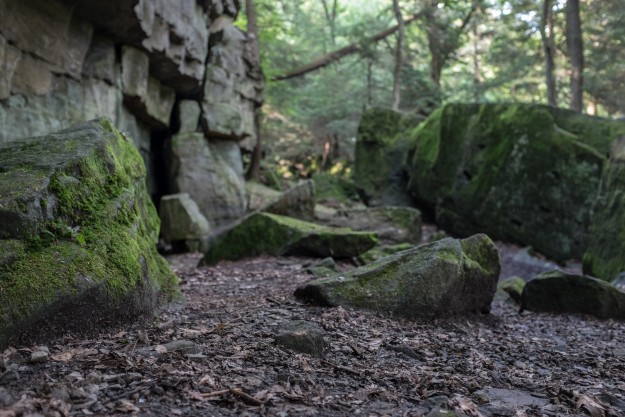 Western Pennsylvania is not known for it’s hugely diverse scenery, it’s not like Arizona where you drive five miles and you’re able to climb a mountain, five more miles and you’re in a forest, a mile further and you’re standing on the edge of one of the 7 wonders of the world (the Grand Canyon).  Generally speaking, you’ve got your forests, cities, and farms sprinkled with a few rivers, lakes, and creeks.  Here we will look at what it takes to create an interesting photograph in the forest.

Some of the difficulties you’ll run into in a forest are similar to challenges you’ll have in other types of photography as well, blown out skies and under exposure for example.  Composition can be very challenging in a forest, think about all the subjects clustered together causing visual noise and distracting the viewer from focusing on what you’d like. 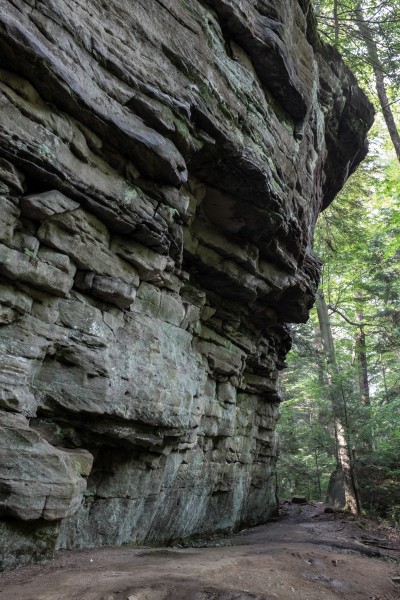 If you’ve ever tried photographing in shade on a sunny day you’ll have noticed that to get the correct exposure in the shade you had to sacrifice the sky (it will look white and blown out in your photograph even if it was a nice blue.  This is due, partly, to your cameras inability to capture the dynamic range that our eyes see.  It’s the same phenomenon that you run into when you photograph a sunset and wonder why you can either get a beautifully colorful sky with the ground underexposed or else you can expose for the ground and the sky will look light and dull.

The only solution is to either, one, use a graduated neutral density filter (the type of filter where half is a few stops darker than the bottom which would be clear) and rotate it so the darker side is on the top to help reduce the amount of light coming from the sky.  Or, two, you could take two photographs, one metered for the sky and the other metered for whatever forest subject you choose and then combine the two in photo processing… this process is called HDR photography and takes some know how (you can use more than two photographs as well).

Under exposure is a little easier to combat.  You’ve got four options: flash, increase ISO, fast lens (low f/number), or a tripod.  You could combine all four of those if you like or just use one to improve your exposure.  Typically I’ll raise the ISO of my camera when I’m photographing in the Forest or anywhere else that is low on natural light since I’m not a huge fan of artificial light (flashes).  A tripod is a must and it comes with me everywhere but sometimes when you are hiking through the forest you are just too lazy to pull it out of your bag (that’s where the increased ISO helps).  If you decide to use your tripod then you can leave your ISO at 100 or 200 and not have to worry about digital noise in your photographs (digital noise can be introduced to your photos when you increase the ISO, each camera handles higher ISO differently).

*The two photographs above were shot using an ISO of 1600, using the Fujifilm X100S.

The composition in a forest is no different from coming up with dynamic composition in any scenario.  The difficulty lies in the fact that you will content with much more visual distraction than you would in most other situations.  Imagine trying to take a portrait of someone, really making them stand out, in a crowd of a thousand people tightly crammed together.  You’ve got leafs, branches, trunks, squirrels, trolls, and every other thing you find in the forest contending for attention in each frame you capture.  So what’s one to do? 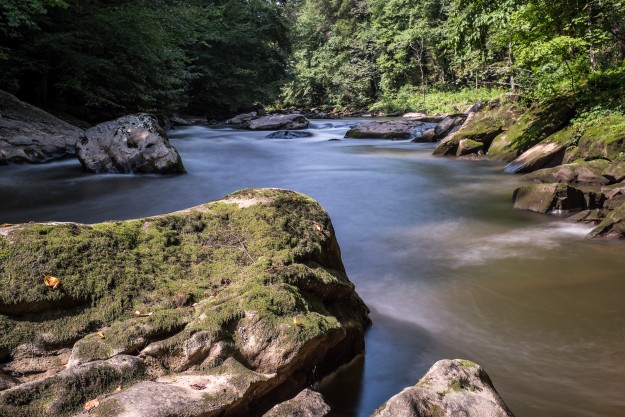 Timing is an important part of composition, you can drastically change the way a scene looks by photographing it at different times of the day or even different times of the year.  Forests change dramatically during the day, the light will enter the forest from different directions as the sun rises and sets revealing new shadows and details that were covered just hours before.  Be sure to revisit the scene you’d like to photograph multiple times if you can, you’ll be amazed at the difference only an hour or so can make.

For me, the time of the year makes all the difference.  You won’t catch me photographing much in the forest until Fall, then I’m like a kid in a candy shop.  There is something beautiful about falling leafs and their kaleidoscope of colors.

“Autumn is a second spring when every leaf is a flower.” 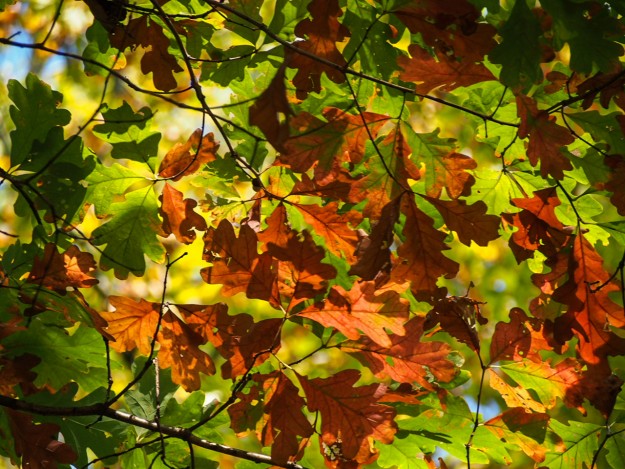 If you are fortunate enough to have a river, pond, lake, or creek in the forest then this is a great place to start.  Along with reflections there are most likely birds and other water-loving creatures meandering around waiting for you to photograph them.  Reflections are great subject matter for a photograph, they are infinitely interesting for the same reason we like mind tricks…  Reflections flip everything around and draw a viewers eyes as well as his mind into the photo in the brains attempt to straighten everything back out and make sense of it.

Leading lines are my favorite compositional tool, they are look arms extending from the lens of your camera with an outstretched finger leading the viewer’s eye right to the point in a frame you want their peepers to focus.  When using lines in the forest you’ll run into an issue where you’ve got trees with natural lines pointing up and branches pointing in every other direction.  In order to use a leading line in the forest you’ve got to find a line that stands out from the rest of the million lines all around you.  You’ll either have to get up close to the line to take the photo, so there is no confusion, or find a line that contrasts with the surroundings (maybe a grey dead tree trunk against the brown bark of the rest of the trees).

Paths make great leading lines, they drag the viewers eyes through a scene as well as giving them the feeling of immersion.  If you decide you’d like to photograph a path try putting your camera low to the ground to change the perspective and create interest.  The photograph below was taken with the Nikon D600 while the camera was about two inches off the ground. 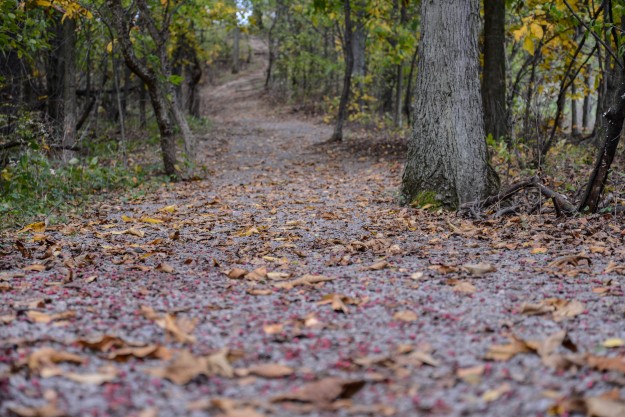 Like I need to say it right?  Flowers are beautiful and, fortunately for you, plentiful in the forest.  When doing any kind of flower or macro photography it’s usually a good idea to wait for a slightly overcast day rather than photographing in blazing sunshine and contending with harsh, unforgiving, light.  I like to use a reflector to redirect natural light to where I need it (the bonus is that you can see where the light is going to be before hitting the shutter button unlike using a flash). 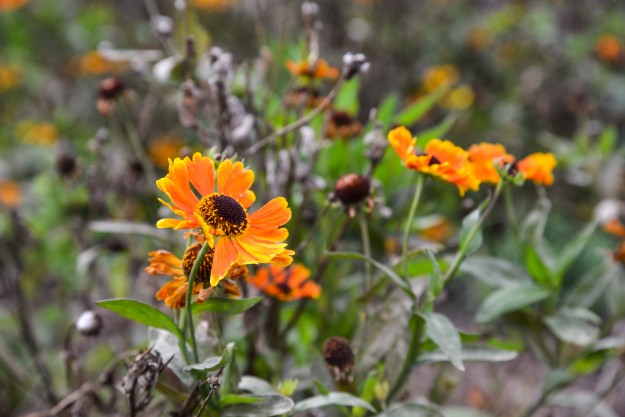 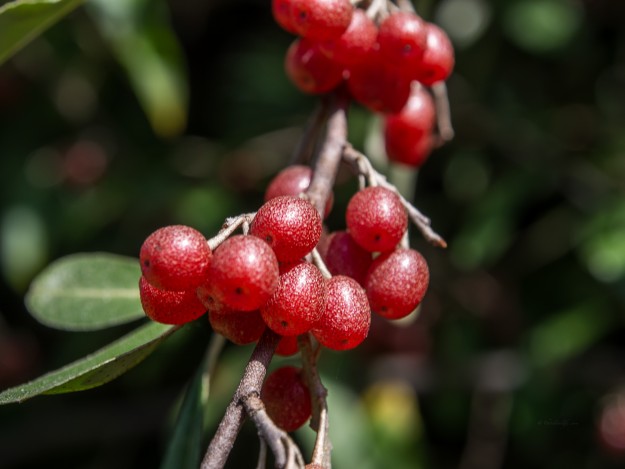 Look up!  If you want to get some interesting photographs try putting your wide-angle lens on your camera and looking up.  When you see the photographs where it looks like the trees are coming from around the lens and then touching at the top the photographer used a wide-angle lens (the trees aren’t touching in reality) and positioned him or herself right in the middle of the trees.  If you are really creative you can try to position your camera on a tripod and take a long exposure shot like this at night to capture some stars and/or the Milky Way above the trees. 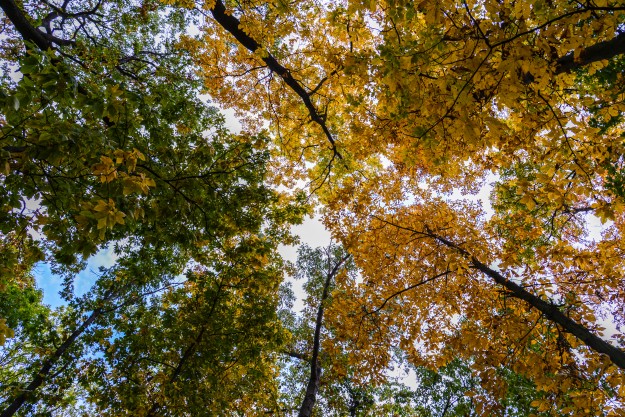 The key to creating interesting, attention grabbing images in a forest is looking for things that stand out.  Challenge yourself to look at the forest in a way you’ve never done before by never taking a photograph from eye level while standing.  Climb on top of a rock or up a tree to get a higher perspective or hold your camera just a couple of inches off the ground for a lower perspective.  Get creative and look for things that contrast with the surroundings.  Good luck!

If you found this helpful please share it by liking, pinning, stumbling, tumbling, or tweeting it.  If you have a great photograph that you’d like to share with the rest of us you can submit it with a brief explanation using the Submit an Article link.

Written By
John Barbiaux
More from John Barbiaux
The Photo Journal is where we will feature one of your...
Read More
0 replies on “Forest Photography Tips”