Photos and Story by Vineet Anand

Sufi saint in a deep thought on the street

I along with my four friends were on a road trip, a trip from Delhi to Jaipur.  We entered the pink city and stopped at the red light.  I had my camera on as always, and I saw the old sufi saint standing on the side of the road.  The saint was in his own world, his face suggested a story of his own.  He was in deep thought..  God knows what he was thinking.  What I felt was not at all good by seeing disgrace on his face, I felt that he was in search of peace.  I clicked his photograph and the signal opened.  The face of the saint touched my heart somehow and I was still thinking about him.  My thoughts took me away from my friends, there was another signal on which our car stopped.  Again I saw a person sitting on the foot path.  His condition was worse, I observed that this person had some poly-bags, which were the only belongings he had.  After seeing him I regained my senses and first thing I did was- I clicked his picture. 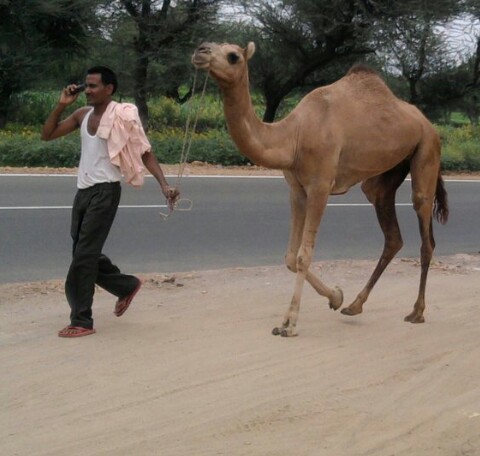 I went back into my thoughts on the people who are left behind by the society and have lost their identities.  In the meanwhile, we stopped for a cup of tea.  I was enjoying the cup of tea with my friends and saw a person going with his camel.  This person had a mobile phone in his one hand and was holding camel’s rope halter in the other.  I clicked the two and felt that technology has invaded the rural India also.

From the whole trip experience I felt that India is developing with a rapid pace, but the humanity in the people of this developing country is diminishing.  The people are left behind, forgotten and unnoticed.  Everyone is busy and have started ignoring things around them.  Somehow we are going away from ourselves and from our roots and is in hope that technological invasion may prove fruitful and bring the desired change.

Have you got a great story to tell and the photographs to go with it? Win $300 cash with your photo story by submitting it here.