Photos and Article by Sucheta Das 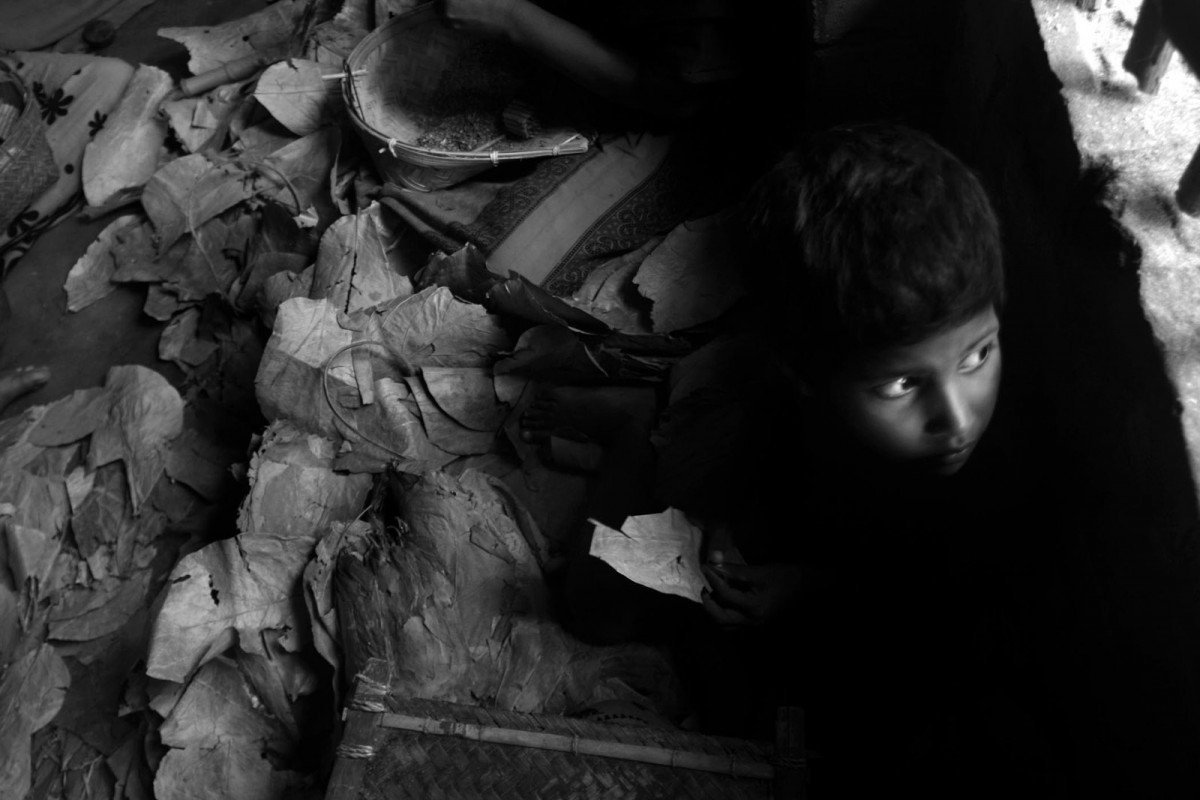 Raja Ul, 8 years old, makes bidi (a leaf-rolled cigar made by tobacco prepared for smoking) at Manoharpur village, Hasnabad, 108 north from the eastern Indian city of Kolkata on 22nd August, 2009.  The bidi rolling industry has been forcing the involvement of children especially minor girls at the age between eight and ten as part of a working family.  Recent study has recommended that the provisions of this Child Labor Act should be strictly enforced with immediate effect to prevent engagement of minor girls from this occupation at the cost of a lost childhood.  Children bidi workers are suffering from health problem and basically they suffer from lung infection and even tuberculosis. Bidi rollers are constantly exposed to tobacco dust and hazardous chemicals.  They experience exacerbation of tuberculosis, asthma, anemia, giddiness, postural and eye problems, and gynecological difficulties.  When bidis are stored in the house, food spoils quicker and family members experience nausea and headaches. 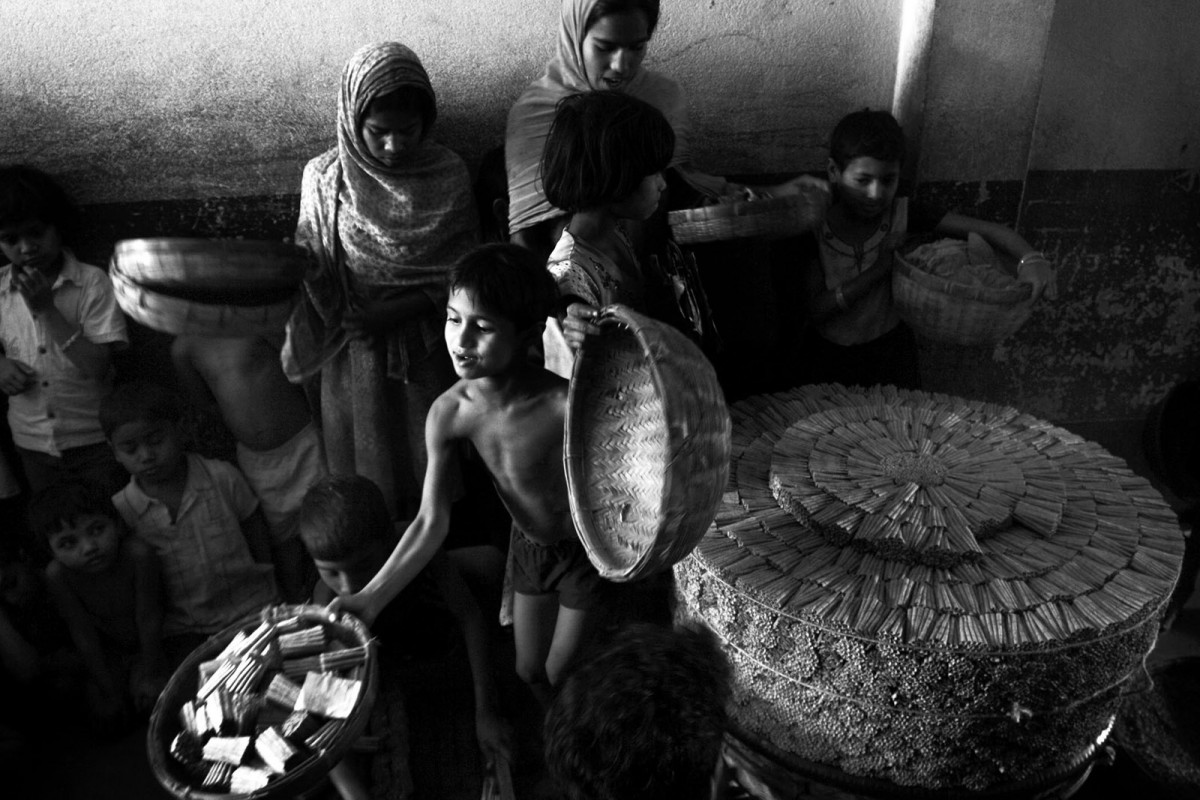 Child labors submit prepared bidi (leaf-rolled cigar made by tobacco prepared for smoking) to a factory contractor inside a factory at Sulitala village, Murshidabad 350 km north from the eastern Indian city of Kolkata, February 08, 2010. 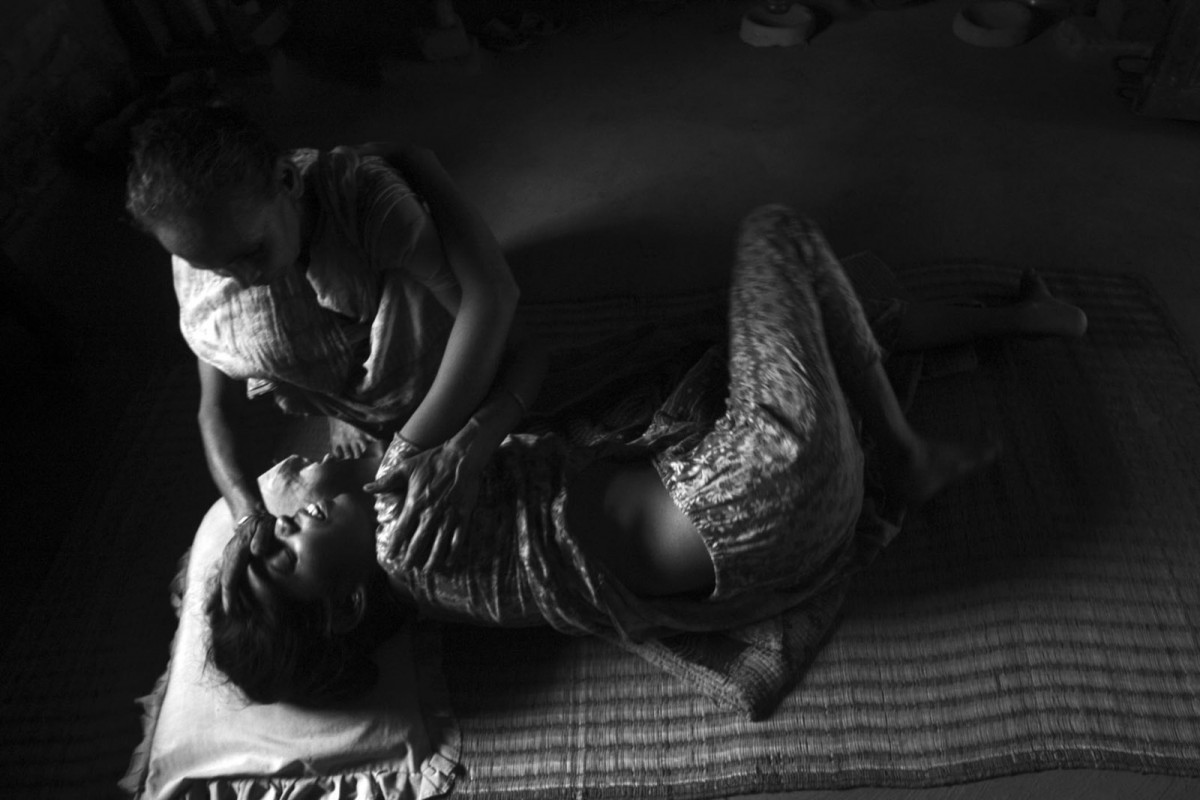 Mameda Khatoon, a 16 years old child labor cries due to bronchial pain as her mother Firoja Beba tries to give comfort to her at Ranjitpur, Murshidabad, 375 km north from the eastern Indian city of Kolkata, April 06, 2010.

Bidi is a leaf-rolled cigar made of coarse tobacco prepared for smoking. Bidi industry is one of the foremost cottage industries in India. India’s rank varies between 4th and 5th in total tobacco consumption in the world after Brazil, U.S.A. Turkey and Zimbabwe. Tobacco is traditional item of India’s foreign trade. India is one of the leading Tobacco exporting countries in the world. The principal market for Indian tobacco is U.S.S.R, U.K, Japan and Middle East countries.

There are thousands of registered and unregistered bidi manufacturers and nearly more than 4.5 million workers are engaged in the ‘unorganized’ home-based sector of this industry.  The bidi industrialists are very cleverly evading the provisions specified under the labour laws – the Child Labor Act 1986 and Bonded Labor System (Abolition Act 1976).  There are about 300 manufacturers of bidi brands and thousands of small-scale contractors and manufacturers involved in bidi production in India.  There are approximately 4.4 million full-time workers and another 4 million in bidi industry related jobs. Most of them are largely poor and illiterate.  A large part of the bidi industry is largely unregulated and home-based, making it difficult to regulate the working conditions and implement welfare laws.  76% of bidi rollers earn a paltry amount of Rs. 33 for every 1000 bidis rolled, which takes up to 12 twelve hours or more a day. This is much below the minimum wage fixed by the government and barely enough to support an average family of 5 members.  The bidi industry in the name of home-based, door-step employment exploits women by not paying minimum wages as recommended by government.

The bidi rolling industry has been forcing the involvement of children especially minor girls at the age between eight and ten as part of a working family.  Children comprise 15 to 25 percent of total employment in the bidi industry. Interestingly, India’s child labor laws do not cover child who help families chore.  But bidi rolling is one of hazards works and it can not be considered as household chores.  Recent study have recommended that the provisions of this Child Labor Act should be strictly enforced with immediate effect to prevent engagement of minor girls from this occupation at the cost of a lost childhood.

The Photo Story Contest has seen an unprecedented amount of entries and we are working as quickly as we can to sift through them all.  Not all entries will be published but all are entered and have an equal chance of winning whether they are published or not (assuming they follow the rules).  Visit back often to see more of the stories pouring in from all around the world.