Those of you that follow PhotolisticLife will have noticed I’ve been focusing a lot on photographing antique or abandon things, things with character and history.  Photiquing or antiqueography if you will.  There are endless things you can photograph inside an old building as well as the building itself.  Here are a couple of ideas I had for those of you looking for a challenge and a new idea.

I found this old freezer while photographing the inside of an old abandon building, the inside of which was obviously not full of bright vibrant colors.  The fact that this freezer had a bright blue badge still affixed to it, some 60 years later, didn’t seem odd to me when I first took the picture.  I like to examine all my photographs after shooting, mainly to see if any would be useful to this site, but also to see which ones I like and learn from all the mistakes I made.  This photograph immediately jumped out at me.

The photograph above was different from the others in that there was a splash of bright blue in it, nothing else in the building had any bright colors like this.  I began to think of a new way to look at abandon buildings and the objects within them.  I began to think about a challenge where you look for old things that still had a bit of color to them, a spot that still looks vibrant yet out-of-place in context with the rest of the scene.  It’s almost like time did what those programs where you strip the color from the photograph and then just paint the area that you’d like to have color stand out do.

After thinking about this challenge a little more I came up with a neat idea that I think would be another fun challenge that most of us can do with photographs we have already taken (assuming you have a few photographs of old things in your portfolio).  Why not photograph some old antiques and have them printed, then hang them next to ads for the same product from back in the 20’s, 40’s, 60’s, or whatever time period is relevant.  For instance, the picture below is of an ad for the same freezer from the 1950’s.  Picture a wall with a photograph of an old object you took recently and then next to that an ad from the time period it was sold, then another photograph of something you took recently and it’s ad next to it… you could do the length of an entire wall with this theme.  It would be a great conversation piece and your friends would think you’re super creative and secretly resent you but admire you at the same time, admirent you (yep, just created a new word… Actually, three new words in this article.  Eat your heart out Webster). 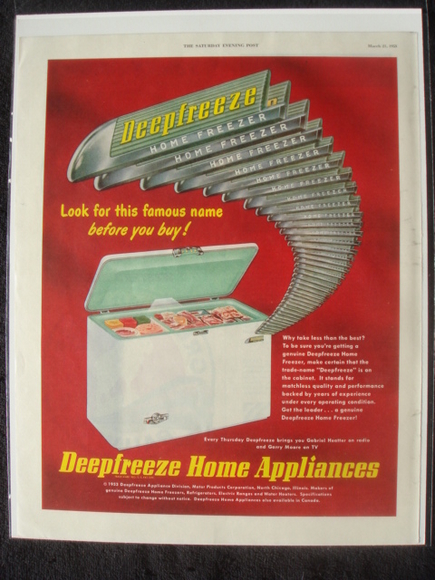 Interestingly these ads and others can be found on amazon, the originals, for sale.


Here is a photograph you’ll recognize from another article, 5 Reasons to Photograph Abandon Buildings, that has a zoomed out shot of the same freezer (you can make out the blue badge on the top right side of the freezer… ).

Written By
John Barbiaux
More from John Barbiaux
There are dozens of ways to learn photography, ranging from reading your...
Read More
0 replies on “Photo Challenge – Antique Photography and How to Present it”