Check out this cropped image of the photo above, the camera was placed firmly on the tripod with a 2 second delay so my clumsy finger press would not shake the camera. 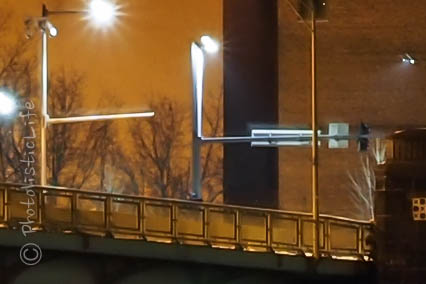 You’ll notice the slight image ghost around the sign on affixed to the lamp-post.  Even though this photo is still fairly sharp, it’s far from perfect.  Looking at this photo zoomed in makes it feel as if you’ve got an astigmatism, like there is the main photo and a lighter ghost of a photo overlapping the main photo but not quite lined up.

The motors used to stabilize the camera actually added some motion blur to this photo because it was trying to compensate for movement that was not there.  I know you already knew you were supposed to do that but I thought it was a good idea to show what it looks like when you don’t.  Hopefully this will make a believer out of those that have not paid any attention to this advice in the past.

Written By
John Barbiaux
More from John Barbiaux
The Photo Journal is where we will feature one of your (the...
Read More
0 replies on “Why You Should Turn Off Image Stabilization While Using a Tripod”